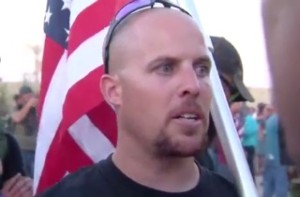 Jon Ritzheimer, the former U.S. Marine behind last Friday night’s anti-Islam rally in Phoenix, told reporters that he’ll be going into hiding for his own safety and the safety of his family.

He said the rally was peaceful throughout, thanked the police for the job they’ve been doing, and said that there have been people “calling for folks to come and behead me,” which he decried as “tyranny” and “terrorism right here in America.”

When asked if it was all worth it, Ritzheimer said to ask the Founders if it was worth it to put their lives on the line in signing the Declaration of Independence. He declared that when you “start trying to oppress American citizens,” people will fight back.

Watch the video below (the audio will sound a little off and you’ll hear commentary from reporters during the clip), via Fox10 Phoenix: