In April, Diane Sawyer saw down with Bruce Jenner 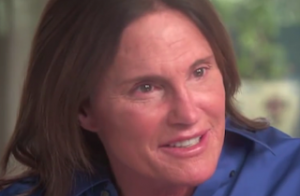 for a major prime-time interview on the ABC Newsprogram 20/20. Much of the interview focused on Jenner’s admission that he was transgender — born a man, but in fact a woman.

But in the public eye, this transition hasn’t happened yet. So the question remains — when will we get to see Jenner as a woman? According to People, our first look at Jenner post-transition will happen sooner than you think:

Jenner, 65, who calls his female identity “Her,” will appear as a woman in the Vanity Fair pictorial, to hit stands this summer, the source tells PEOPLE.

Since the program’s April 24 air date, E! announced its plans for a docu-series based on Jenner’s journey into womanhood — including the eventual sex change. Jenner and Sawyer alluded to this throughout the interview, especially when the topic of whether or not the public would see him as a woman anytime soon.

Not only do we now know that the public’s first look is going to happen soon, but the report also reveals who will be taking the photo:

Leibovitz, who most recently photographed the Star Wars: The Force Awakenscast for Vanity Fair‘s June cover, has chronicled the world’s biggest celebrities over her 40-plus year career, including Michael Jackson, George Clooney, Queen Elizabeth II, Johnny Depp and Lady Gaga.

Look for Jenner’s Vanity Fair cover sometime in the next few months.

Previous [WATCH] Rand Paul Makes Egregious Claim: My Opponents ‘Secretly’ Want Attack on U.S. ‘So They Can Blame It on Me’

Next Organizer of Phoenix Anti-Islam Rally Going Into Hiding, Says ‘Tyranny Is in America’