Leander Dewey Jones, 63, of 2931 Brentwood Road, is charged with three counts of second-degree sexual exploitation of a minor. He was being held in the Wake County jail under a $600,000 bond.

Jones is a member of the Triangle Santa Buddies organization, according to the group’s founder, Al Capeharp. The group’s website said he joined last year. 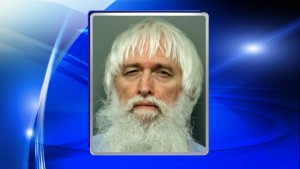 “I have no comment at this time. We need to know more,” Capeharp said Monday.


Three years ago, John Thomas Peters, another member of Triangle Santa Buddies, was charged with soliciting teen girls online for sex. He pleaded guilty in October 2012 to second-degree sexual exploitation of a minor and soliciting sex by computer and was sentenced to 20 months in prison.

Capeharp said Triangle Santa Buddies doesn’t perform background checks on its members. However, a background check would have found nothing on Jones, as he has no prior criminal record.
Read more at http://www.wral.com/man-facing-child-porn-charges-worked-as-mall-santa/14682447/#1h83rHI7v4qI6IFa.99

Next Man arrested for erection at World Naked Bike Ride....