RAYMOND, Miss. – Nine undocumented immigrants have been arrested in Raymond for identity theft. Attorney General Jim Hood said they suspects were arrested Thursday at the American DairyCo plant in Raymond.

The defendants are alleged to have purchased fraudulent social security cards.

“This case is a great example of the significance of our federal partnerships,” said Attorney General Jim Hood. 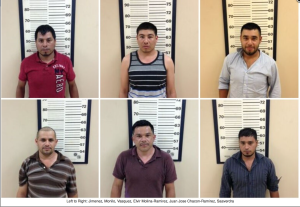 “We appreciate our great working relationship with Homeland Security Investigations”.“Fraudulent documents threaten our nation’s security by making it easier for criminals to hide in plain sight and commit a range of offenses,” said Jerry Templet, Acting Deputy Special Agent in Charge of HSI New Orleans.


“Further, stolen identity documents create a potential nightmare scenario in which citizens could be held responsible for criminal acts committed by aliens possessing fraudulent identity documents in their names. This investigation shows HSI and its state partners will continue to investigate and seek prosecution of these cases wherever they occur.”

Officials with the company where the defendants worked cooperated with officials.

They are all being held on a $250,000 bond. Once the state charges are resolved, the defendants will be released to ICE custody.

Those arrested and charged with fraudulent use of identity are:


Previous [PHOTOS] Passenger Shocked as he watches his plan being repaired with tape moments before take off....