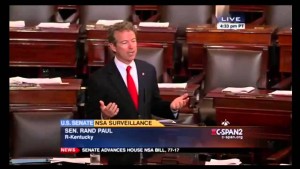 During Sunday evening’s debate over the expiration of the Patriot Act, Sen. Rand Paul (R-KY) took the podium and delivered some harsh words for his opponents who he believes will say anything to keep the NSA’s bulk data collection abilities, including blaming terror attacks on him.

In a clip first spotted by the Daily Caller, Sen. Paul delivered this monologue that included a jab at his political opponents as well as Fox News host Gretchen Carlson for her leading line of questioning last week [emphasis added]:

People here in town think I’m making a huge mistake. Some of them, I think, secretly want there to be an attack on the United States so they can blame it on me. One of the people in the media the other day came up to me and said, “oh, when there’s a great attack aren’t you going to feel guilty that you caused this great attack?” It’s like the people who attack us aren’t responsible for attacks on us. Do we blame the police chief for the attack of the Boston bombers? The thing is that there can be attacks even if we use the Constitution, but there have been attacks while collecting your bulk data. So the ones who say when an attack occurs it’s going to be all your fault, are any of them willing to accept the blame? We have bulk collection now, are any of them willing to accept the blame for the Boston bombing, for the recent shooting in Garland? No, but they’ll be the first to point fingers and say, “oh, yeah it’s all your fault, we never should have given up on this great program.” I’m completely convinced that we can obey the Constitution, use the Fourth Amendment as intended, spirit and letter of the law, and catch terrorists.

Watch the clip below, via C-SPAN2: