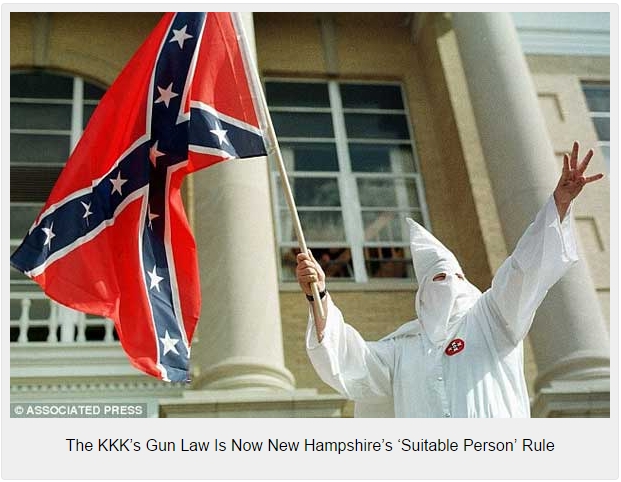 New Hampshire Senate Bill 116 repeals the requirement that one be a “suitable person” in order to obtain an optional License to Carry a Pistol or Revolver (LTC).

It is optional because SB 116 also repeals the requirement that one have an LTC for a handgun in New Hampshire.

The term “suitable person” can directly trace its roots to racism and the growing political influence of the Ku Klux Klan in New Hampshire in 1923.

Governor Hassan has threatened to veto this bill which has passed both the House and Senate. Yet, it would be a mistake to let this racist relic remain on the books. 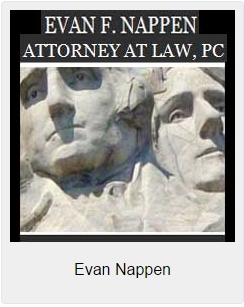 New Hampshire’s long-standing “suitable person” standard is founded upon racism directed at immigrants. New Hampshire’s LTC law dates back to 1923 and started out as House Bill No. 26. According to the Journal of House of Representatives from January 1923, this act was passed to “…control the possession, sale and use of pistols, or revolvers….” The new law required that “no person shall sell, deliver, or otherwise transfer a pistol or revolver to a person who is an unnaturalized foreign-born person or has been convicted of a felony….” New Hampshire’s gun control law equated legal immigrants with felons as one in the same. In House Bill 26, the current LTC was created in which one had to be a “suitable person” to be licensed. A suitable person was plainly NOT an “unnaturalized foreign-born person” or a felon.

According to an article in Historical New Hampshire Vol. 43 No.4, The Ku Klux Klan In New Hampshire, 1923-1927, by Stephen H. Goetz, “…Ku Klux showmen blamed societal change on groups of scapegoats: blacks, Catholics, Jews, and immigrants.” In the book The Ku Klux Klan in American Politics ( http://tiny.cc/rfo0yx ), by Arnold S. Rice, he writes:

“The Klan’s plank was chameleonic;…in New England, anti-French Canadian; in the large cities of the Northeast, anti-alien-born….” Rich further writes that the tenets of the Ku Klux Klan were the following: “(1) memorialization of the original Klan; (2) white supremacy; (3) anti-Semitism; (4) anti-foreign-bornism; (5) anti-Catholicism; (6) “pure” Americanism; (7) Protestantism and strict morality.”

This “suitable person” requirement is offensive to those who believe in people being treated as individuals, and not being discriminated against based on race, creed, color or religion. The “suitable person” law in 1923 gave in to the Ku Klux Klan’s political agenda. It is long overdue for New Hampshire to get rid of this disgrace.

About:
Evan Nappen is a criminal defense attorney who has focused on New Jersey firearms and weapons law for over 23 years. He is the author of the New Jersey Gun Law Guide. Visit his website at www.EvanNappen.com

Next Washington D.C. Thumbs Its Nose At The Courts While Denying Concealed Carry Licenses