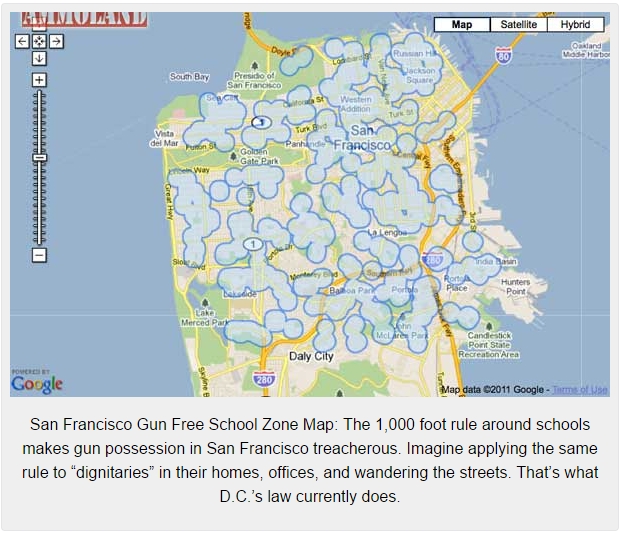 Some people thought the Heller and McDonald decisions would solve, or at least seriously mitigate the problem of states and localities enacting or enforcing draconian restrictions on guns and gun owners, but so far the impact of those two Supreme Court rulings has been limited, and the Court has refused to hear any subsequent cases that would have helped the situation.

Though several jurisdictions have had to roll back their outright bans of firearms, particularly handguns, many have replaced their bans with so much red tape and bureaucratic BS that individual rights are still virtually non-existent.

Two of the biggest culprits are Chicago and Washington, D.C., the very cities where the Heller and McDonald cases were born.

Both cities, and in the case of Chicago, its bedroom communities as well, have fought tooth and nail to maintain the harshest restrictions possible as the courts have forced them, through one expensive lawsuit after another, to roll back the corners of their blanket bans and overreaching restrictions. In the process, the cities have spent millions of taxpayer dollars to keep those taxpayers disarmed.

Last year, Federal District Court Judge Frederick Scullin ruled that DC’s ban on the carry of firearms outside the home was unsupportable in light of the Heller decision, so the DC government implemented new laws providing for licensed concealed carry, but making the process as expensive and onerous as possible, and including a number of outrageous restrictions, including one requirement that a person seeking a license to carry a gun must prove a special need to do so. Just living in one of the most crime-ridden cities in the country, or one of the most dangerous neighborhoods within that city, was not considered sufficient under the DC law. An applicant was required to produce specific threats aimed at them personally, and even then, Police Chief Cathy Lanier could deny the applicant for any reason, or no reason at all. Judge Scullin has now struck down that requirement.


The judge’s ruling came down in response to very narrow and specific complaints from plaintiffs in the case which was sponsored by the Second Amendment Foundation and is being led by Alan Gura, the same attorney who represented Dick Heller and Otis McDonald. This ruling didn’t touch on other components of the DC law such as the ban on carry within 1000 feet of any US or foreign “dignitary.”

When you consider the vast number of people who could be considered “dignitaries” by DC Police, and the huge number of such people spread throughout the district, that restriction by itself constitutes a de facto ban on carry.

The arbitrary “1000 foot rule” is also used in the federal Gun Free School Zones Act, forbidding the carry of a firearm by unlicensed persons within 1000 feet of school property. That’s a lot of real estate, somewhere between two and three city blocks, further than a comfortable rifle shot. Under the Gun Free School Zones Act, it is virtually impossible to legally travel through almost any city in the nation without a state-issued license. My friend Alan Korwin of GunLaws.com had maps drawn up for several cities to show the real reach of these zones, and how they put gun owners at risk. Look at the map above, copied from the official website for the city of San Francisco, and imagine the same 1000 foot zone around every person that DC police might consider a “dignitary.” Lawful carry in the city could only be marginally possible in the poorest neighborhoods – where the residents could never afford the fees and costs of the mandatory training. 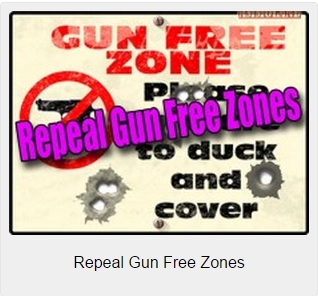 Hopefully Mr. Gura will continue filing motions to strip away this thoroughly unconstitutional law piece by piece. In the meantime, visiting DC is relatively safe as long as you stay in the more prosperous sections of the city, but one has to wonder why the citizens tolerate politicians who insist that their own citizens are less responsible, less trustworthy, and less law-abiding than the citizens in the rest of the country. The more cynical observer might suggest it has something to do with the color of their skin and their level of dependence on government subsidies, but of course that would be ridiculous since DC is completely controlled by “progressives,” and everyone knows “progressives” are colorblind and class unconscious. Right?

This case, like several others around the country, has judges disagreeing while citing the same sections of the Heller and McDonald decisions to support their conclusions. It is painfully obvious that the Supreme Court needs to settle the disagreements and insert some clarity, especially since most of these lower court decisions are trending away from the clear intent of the Second Amendment and the Courts holdings, building up a mass of case law which will cause some significant disruptions within the system were they to be overturned as they should be.

Still SCOTUS assiduously avoids taking any of the several cases that they could have used to clear up the matter.

Until that happens, cities and states will continue using taxpayer money to defend laws that do nothing more than cost taxpayers money and place them in jeopardy from criminals and the law.

Both Heller and McDonald were decided in 5 to 4 split decisions on the Court. The reluctance to hear new Second Amendment cases could be based on uncertainty from both sides as to how these cases might be decided. With several of the Justices getting up there in years, the future of the Court’s Second amendment cases is very probably going to depend upon who is elected President in 2016. The stakes couldn’t be higher. (Article originally published at WND)

Next #BlackLivesMatter Protest Page is Hacked and Defaced!