Earlier this afternoon a Black Lives Matter Facebook page entitled “Baltimore Protests” was hacked and defaced by Patriotic Hacktivist and Info Sec member “iHazCandy” of Consternation Security who is also the CEO of PatriotVPN.  Over the course of the last year iHazCandy has become well known for his work against Anonymous groups who intended to do harm to Ferguson Police Officers, and his preventative measures taken to protect the American Military against foreign and domestic threats such as ISIS and Hamas. 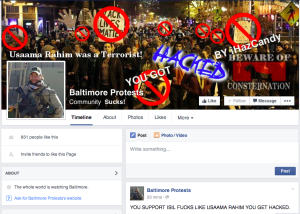 It seems the the Facebook page “Baltimore Protests” had recently created a protest event located in Ferguson MO, in reference to the recent killing of Usaama Rahim in Boston MA, who was killed due to his actions of lunging at police with a large military knife.  (Video below)

The New York Times reports that Usaama Rahim was under 24-hour surveillance for “communicating with and spreading ISIS propaganda online” and had intentions of “beheading police officers”. The “Baltimore Protests” Facebook event sought to recruit members of the Ferguson community to protest the death of Usaama Rahim from across the street of the Ferguson Police Dept by first enticing them with free Halal BBQ at 5pm, while radicalizing them for protests at 8pm.  The creation of the “Baltimore Protests” page and its creation of a protest event in Ferguson should raise red flags for Patriots nationwide.  As Americans we should keep a keen eye open for connections between individuals who travel from city to city to protest in places which recently have outcomes such as in Baltimore and Ferguson.  The issue of outside and foreign agitators who pay Americans who are willing to subvert authority under the guise of protesting is now in the mainstream of American talking points, and our leaders must address these issues because they have become safety concerns.

What category should Americans consider those who accept money to carry out the subversive will of these foreign agitators?


Last week Consternation Security published new evidence of paid protesters in the Ferguson and St. Louis region. And last Monday explained in depth how protesters were being paid under the table on the PatriotVPN Radio Show (episode: new evidence of paid protesters). The next show is scheduled for this Saturday June 6th @10pm EST and will be talking about this recent hacking and defacement of the “Baltimore Protests” page.  Tune in here.

Going forward we tip our hat to those at Consternation Security for providing protection against the threats that intend to harm America and her Patriots.  If you would like more information on Consternation Security’s operations, or to donate click here for more info.  iHazCandy can also be reached by twitter here.

Next According to IRS Com. under Obamas Amnesty plan Illegals eligible for BACK Tax refund even if they never filed taxes...