A 28-year-old Iranian cartoonist who drew members of her country’s parliament with the heads of monkeys and cows has been sentenced to 12 years and nine months in prison for “insulting members of parliament through paintings” as well as the Iranian supreme leader. Atena Farghadani, also a painter, was also accused of “gathering and colluding with anti-revolutionary individuals and deviant sects” because people fitting that description attended an art show featuring her work. 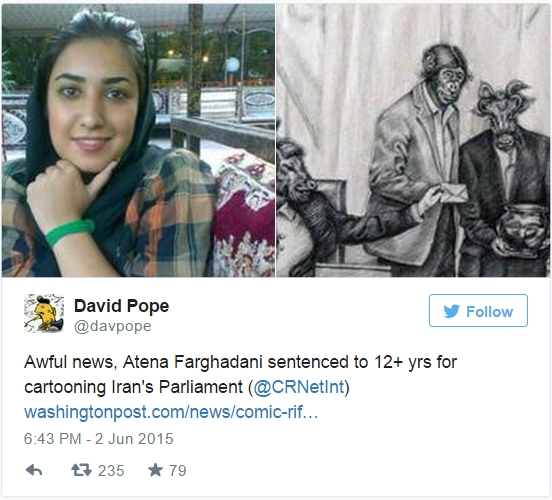 Farghadani was arrested last year and served nine months while awaiting her sentence. During that time, she was beaten after refusing to strip for a full body search and found out that she was being watched by cameras that guards told prisoners were not working. She would smuggle paper cups so she could draw to pass the time; eventually, guards stopped giving her paper cups. After being released in November, she made a video describing her mistreatment and was arrested again in January. She went on a hunger strike and had a heart attack, then was moved to a detention center.

Amnesty International has been following her case and labeled Farghadani a prisoner of conscience, which means that she’s been in prison twice and faces more time for merely expressing her political opinions. The cartoon in question was a comment on the Iranian parliament passing laws against certain methods of contraception.