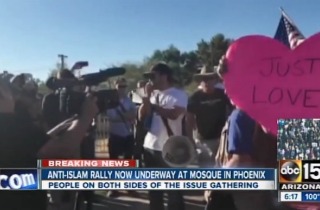 The only two Muslims in the U.S. Congress are calling for a Department of Justice investigation into the armed anti-Islam rally in Phoenix last week. Jon Ritzheimer organized the rally, along with a Muhammad cartoon contest, in response to the targeting of a similar event held in Garland, Texas weeks ago.

The rally was held at an Islamic community center reportedly attended by the two men who targeted the Garland event. Ritzheimer encouraged people on the group’s Facebook page to bring guns, but aside from a few minor skirmishes, nothing serious really happened.

But Democrats Keith Ellison and Andre Carson sent a letter this week to Attorney General Loretta Lynch asking for a DOJ investigation to look into “whether armed demonstrators outside of mosques violates the First Amendment rights of worshipers and… the Freedom of Access to Clinic Entrances Act.”

They say they’re worried about “armed demonstrators shouting hate speech” creating “an environment that is likely to produce imminent violence.”

Ellison and Carson argue that First Amendment rights aren’t “absolute” and something needs to be done:

Armed protesters intimidating worshipers at churches, synagogues, mosques, or any religious place of worship seems to be exactly the behavior that Congress sought to outlaw when it passed the FACE Act. Enforcement of the law should not vary based on the religious affiliation of those being intimidated.

The presence of assault weapons couples with deep seeded bigotry and hate speech creates a clear and present danger to worshipers and threatens lawless action.

Next [VIDEO] What?! Graduation Cheers Met with Arrest Warrants in Mississippi