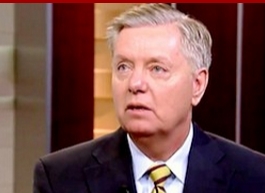 Senator and 2016 GOP hopeful Lindsey Graham (R-SC) made it excruciatingly clear on Fox & Friends Thursday morning that his administration would go to war with somebody, whether the American people wanted it or not.

Graham was bullish on his foreign policy credentials leading him to victory over a crowded GOP field. “It’s a tough message,” co-host Steve Doocy said. “A lot of people are just worn out by war.”

“Then don’t vote for me,” Graham responded. “Because I’m telling you what’s coming. Barack Obama’s policies of leading from behind are going to allow another 9/11. [ISIS] is large, rich, and entrenched. If I’m president they will be poor, small, and on the run.”

Watch the clip below, via Fox News:

What do you, our readers, think about Graham’s stance? Should we go to war with ISIS?

Previous [WATCH] Here is the VIRAL video of the most amazing card illusions, by fontaine cards Founder Zach Mueller