In a statement, Joyce said the statute of limitations has not run out in the abuse case against Adrienne Martin, and the case remains open. 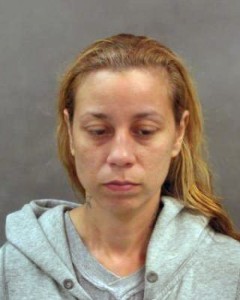 Martin, then 35, was charged in July 2013 with two felony counts of animal abuse. She was arrested after an investigation by the city’s Animal Cruelty Task Force. She told police that the dog, named Brownie, had bitten her son the day before the dog was burned. Martin is the sister-in-law of the dog’s owner.

A witness picked Martin out of a photo lineup. Under questioning, Martin admitted setting the dog on fire. Martin lived in the 3900 block of Palm Place, which is a few blocks from where the incident took place in the 4300 block of Cote Brilliante Avenue.

Several posts on a Facebook page under Martin’s name referred to dogs. A post the day before incident reads “I’m on killa mode…#killdogs.com…today.” One the day the injured dog was discovered was tagged with “#alldogsdontgotoheaven.com.” 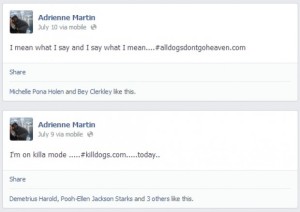 Joyce’s office could not provide additional details because the record is closed.

“Despite prosecutors’ belief in a defendant’s guilt with any crime committed in our city, we must have the evidence and cooperation of witnesses to testify in court for prosecutors to seek justice,” the statement said. “Animal abuse is extremely concerning to our office. No living creature should be subjected to abuse of any kind. We continue our commitment to hold animal abusers accountable for their actions and we will continue to pursue cases like these in the future.”

Animal-rights activist Randy Grim, who is founder of Stray Rescue and a member of the mayor’s Animal Cruelty Task Force, said he was devastated to hear that a key witness backed out before the trial began.

“I’m feeling numb that justice wasn’t served for Brownie, but I still hold out hope,” Grim said in a news release.

He said he hopes the witness has a change of heart.

Next “Snowden’s a Hero, Drug War’s a Failure, Guns Aren’t for Hunting” Vince Vaughn Tells it Like it Is!