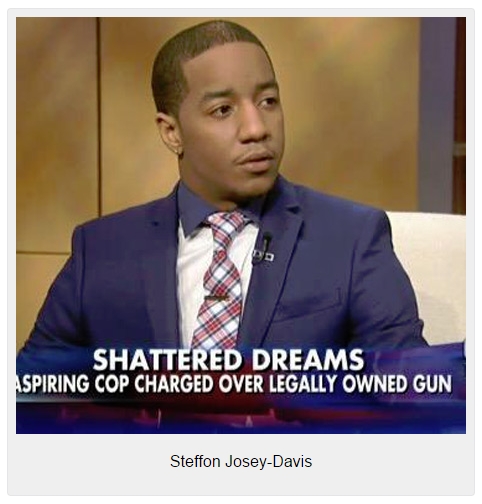 Steffon Josey-Davis, a young black man aspiring to be a cop in New Jersey, was pulled over for a routine traffic violation in 2013 and thereafter charged with a second-degree felony for a having a legally owned gun in his glove compartment.

Davis told the policeman the gun was in the compartment when he was pulled over, and the officer took the gun without any mention of charges. Davis was an armed guard for Loomis at the time. Yet because the gun was still loaded in the glove compartment, he was later given the option of five to 10 years in prison or a plea deal for a second degree felony.

He took the plea deal, which destroyed his dreams of being a police officer.

Fast forward to 2015. Upon advice from others Davis reached out the NAACP for help, hoping to get the felony expunged from his record so he can put his life back together again.

Davis told Fox News, “I went to the NAACP but they refused to help me. They say ‘black lives matter,’ but obviously they…[all] don’t because I didn’t fit their agenda.”

Fox News’ Steve Ducey asked, “What do you mean by ‘didn’t fit their agenda’?”

Davis responded, “Basically, like, I’m not getting shot by a police officer so they’re not going to come out and defend me.”

Davis added: “I’m out here doing better for myself, and trying to provide for my family, and my life matters too.”

Ducey pointed out that Davis’ “last line” — his last chance — for changing things now is a direct appeal to Gov. Chris Christie (R) for pardon. Davis said he is already in the process of seeking that pardon and has a GoFundMe campaign opened to fund those efforts.

Previous Vince Vaughn Supports Guns In Schools, As Do A Majority Of Americans

Next Chicago Tribune Says Gun Rights May Be an ‘Illusion’