A man lost his car after his dog drove it into a pond.

The man of Warren, Vermont, left his dog in the car unattended for a few minutes before the dog drove it into the pond.

Nick Hayer took his 2-year-old dog Lucy with him to work for the day before he set out to get lunch. 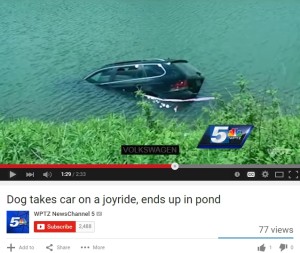 Hayer said that he rolled down the window halfway and opened the sunroof so that the English bulldog that works as a therapy dog, would not be stuck in the hot car while he was getting his lunch.

A few minutes later, a man walked up to Hayer and told him that his car is in the pond, but his dog was rescued.

When Hayer went outside, he saw his Volkswagen Jetta submerged in water. The car was totaled. Hayer was grateful that his beloved pet was saved.