A man was excited when his fishing trip netted him a shark.

Patrick Lanier of Florida, tried to sell a live shark outside a Publix store on Thursday.

Shoppers in Fort Lauderdale, said that Lanier dragged the five-foot shark onto the sidewalk and dropped it on the pavement in an attempt to sell it.

Lanier said that he was very excited when he caught the shark. “I felt like a leprechaun, like I struck gold,” he said.

Lanier waited for a customer who was willing to pay $100 for the shark, but no one seemed to be interested.

The shark was kept on the pavement while shoppers stopped to witness the unusual site. 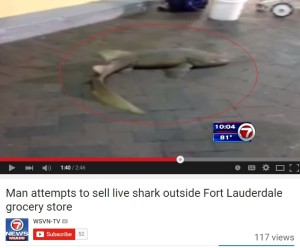 “Occasionally, I would throw a little water on it,” Lanier said. “It was nice to see people’s faces light up, excited to touch it and really experience what it is,” he added.

When workers at Publix learned about the shark that was up for sale on their property, they asked Lanier to leave, and he did.

With no buyer, Lanier said he released the shark back into the water, where it swam away.

Lanier said that he was informed that it is illegal in the state to sell a shark that has caught without a commercial license. He said that he learned his lesson, and is unlikely to ever do it again.