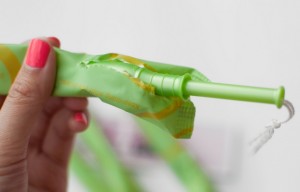 A police officer in Florida, is under investigation after she was seen on video beating a female      jail inmate because she asked for a tampon.

Audra West was being booked into the Broward jail after being arrested for disorderly conduct when she asked Officer Kristin Connelly for a tampon.

Connelly instructed West to ask politely. West asked politely, but Connelly said that she could give her a pad. In response, the officer claims that West cursed.

Connelly stood up from her desk and put on gloves before beating West.

West was slammed face down on the floor and Connelly punched her in the side of the face, according to West’s attorney.

West fought back in self-defense.

During an investigation, Connelly admitted to striking West in the face twice because she was trying to get West to change clothes.