A 44-year-old man was seen on video dancing on top of a police cruiser. 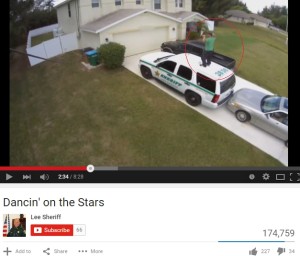 Christian Radecki of Cape Coral, Florida, was arrested
after he was caught on video surveillance pulling into the driveway of a police officer.

He came bumper to bumper with the police van belonging to the Lee County Sheriff’s Office.

When he was done dancing, Radecki slid down on the windshield and broke the wipers of the officer’s vehicle.

He then proceeded to remove and American flag from a neighbor’s garden.

Redecki was arrested for disturbing the peace and criminal mischief after neighbors called police.

According to the police report, Radecki told police that a “woman with fangs” came to his door and informed him that a human sacrifice was about to happen involving vampires and children.

“Therefore, Radecki made a conscious decision to get the sheriff to help stop the slaughter of young children,” the report said.

Radecki told officers that he did not take any recreational drugs or alcohol, and has never been diagnosed with a mental health condition.

Radecki was taken to Cape Coral Hospital for a medical evaluation before being transferred to the Lee County Justice Center.