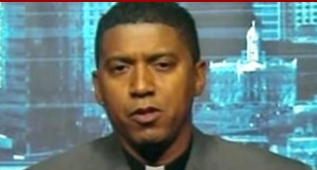 Race-Hustler Al Sharpton appeared in Hartford, Connecticut this past weekend at a rally to address five homicides and more injuries in the community earlier this year. Sharpton spoke at the anti-violence rally and said that everyone needs to come together.

However, there were moments where speakers asked for donations to Sharpton’s National Action Network to help the people of Hartford and a local pastor cried foul. Pastor Marcus Mosiah Jarvis shouted, “Don’t you come up in here asking us for money!” and even called Sharpton a “pimp.”

Sharpton had responded at the time by saying the money will be raised specifically for a fund meant for the community, and even donated $1000 himself.

Jarvis appeared tonight on Fox News to explain to Greta Van Susteren why he felt compelled to speak out. He said he didn’t understand why Sharpton would ask an impoverished neighborhood for money and said of Sharpton himself, “We could do better as far as representation of the African-American community.”

He added, “We do have some charlatans and some pimps in the pulpit.”