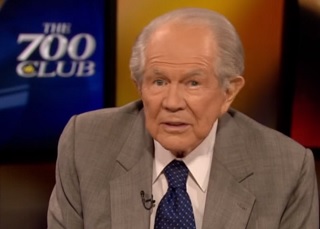 When Pat Robertson can still surprise you with insanely horrible things that come out of his mouth, at least that’s some evidence that you’re not totally jaded yet. There is still a little scintilla of innocence left inside of your dark, cavernous soul that still finds the energy to say, “Wait, what?” I’ll let the latest video of Pat Robertson mumbling and drooling some nonsense out of his mouth be that piece of evidence.

A friend of a woman mourning the loss of her three-year-old wrote in to The 700 Club asking what to tell her friend when asked how a good God would let some ill children live but let her child die. In his infinite wisdom, Robertson said that God can see the big picture of life and probably killed her child before he or she could become Adolf Hitler.

Don’t believe me? Don’t think Robertson himself would have the gall to say such a thing to a woman grieving her three-year-old? Here’s the full quote:

Still don’t believe it? Here is the video of him making those exact words come out of his mouth by using his brain and vocal cords:

But this logic is completely flawed. If Robertson’s version of God truly can see what he says He can see, then why didn’t he kill Hitler, Stalin, or all those serial killers while they were children? Did he see them draw a pretty picture or save a puppy from a fire and then assume that they wouldn’t go on to become evil, so He spared them? Because that’s seems a bit short of seeing “the end from the beginning.”

It appears Robertson just jumped Godwin’s shark. In fact, he may have jumped it, water-skied behind it, then jumped it again.