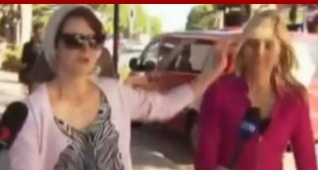 A woman refused to answer a reporter’s questions and instead of politely walking away she stubbed a lit cigarette into the reporter’s face.

The woman had previously been in court as a supporter of Stevee Jane Kennedy, a young woman charged with the murder of her ex-boyfriend.

9News Reporter Alex Bernhardt tried to ask the woman a question, and tweeted later what happened:

According to 9News, the woman was charged with public nuisance and will appear in court next month.


Watch the video below, via 9News:

Next [VIDEO] Pastor Calls It Like It Is, Shouts at Sharpton During Rally, Calls Him a ‘Pimp’