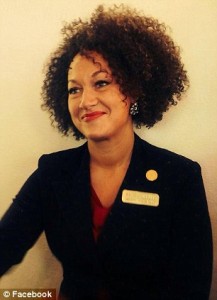 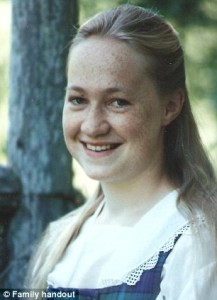 First Elizabeth Warren professed her native American heritage, and Bruce Jenner became Caitlyn Jenner. It just seems there is an epidemic of people trying to be anything but what they really are. The latest trans “whatever” to enter the identity confused is, ‘NAACP Spokane Washington Branch President, Rachel Dolezal. She thinks she is black.

Dolezal, who has been a civil rights activist across Idaho and Washington and works part-time as an Africana Studies professor at Eastern Washington University, is now facing a city ethics probe for falsely claiming on an application that she was black.

Her parents, who are estranged from their daughter, say they first found out she was claiming to be African American as they read a newspaper article about her ‘some years ago’.

Unlike Elizabeth Warren, Dolezal does have a trace of native American blood, but most of her DNA is Czech, Swedish and German, and it doesn’t get much more caucasian than that.
The world found out about her identity indiscretion from her estranged parents.

‘She has never claimed to be biracial or African-American in our presence,’ they told CNN.

But they have also not spoken to their daughter in years, they said. She has claimed in interviews that they were violent towards her, which they have denied. Instead, they say she has cut them out because she fears they will blow her cover.

‘Rachel has chosen to distance herself from the family and be hostile towards us,’ her mother said. ‘She doesn’t want us to be where she is, she doesn’t want to be seen with us because it ruins her image.’

It would appear that Dolezal has a long, long history of pretending to be a person of color.

The couple has adopted four younger children of color – three African-American children and another from Haiti – but they say their daughter’s interest in diversity far preceded that.

They always surrounded themselves with friends of different ethnicities, they said, and when she graduated from Belhaven University in Jackson, Mississippi, she applied to Howard University, a historically black college in Washington, D.C.

Although she did not claim to be African American in her application, the family believes the school thought Dolezal was black, because she was coming from Jackson and her artwork used African imagery.

She also has a confused about here familial heritage.

The parents have said the family background is Czech, Swedish and German, as well as some ‘faint traces’ of Native American blood.

However, when Rachel Dolezal applied to become chairwoman of Spokane’s Office of Police Ombudsman Commission – a volunteer appointment – she marked herself down as white, black and American Indian, the Spokesman-Review reported.

She has also previously claimed that her white father is her step-father.

In January, a photo showing Dolezal and a black man on the Spokane NAACP’s Facebook erroneously identified the man as her father.

Read the rest of the story at the DailyMail.


Check out the rest of these top headlines:

THE NEXT TREND IN PERFORMANCE ART: VAGINAL KNITTING

With all the craziness in the world, “Hands Up-Don’t Shoot,” Caitlyn Jenner, does the world need performance artists adding to the mix. Apparently so. Straight …

HILARIOUS VIDEO!!!! YOU JUST KNOW NO ONE MESSES WITH THIS KID! GREAT VIDEO!

This little girl has got it goin’ on. I certainly wouldn’t mess with her and I bet she’s a handful at home, too. Every thing …

WOULD YOU VOTE FOR THIS NAKED COWBOY? FINALLY! A CANDIDATE WITH NOTHING TO HIDE!

Finally! A political candidate who puts it ALL out there, with NOTHING TO HIDE. Literally! But, alas, he doesn’t live in the U.S. . . …

A LITTLE CREATIVITY TO MAKE YOU SMILE

Clearly, someone has a little too much time on their hands, but you have to admit, it is kinda cool. Enjoy these intricate balloon sculptures, …

VIDEO: COPS VS. BATMAN – NOT YOUR ORDINARY TRAFFIC STOP

Cops deal with all kinds of issues and all kinds of people, but I bet they never thought they would have to apprehend Batman. These …

O.M.G. MUST SEE VIDEO: BABY SHARKS BORN ON THE BEACH

You’ve never seen anything like this. Imagine spending a relaxing day on the beach and spending it as a midwife to a dying shark. The …