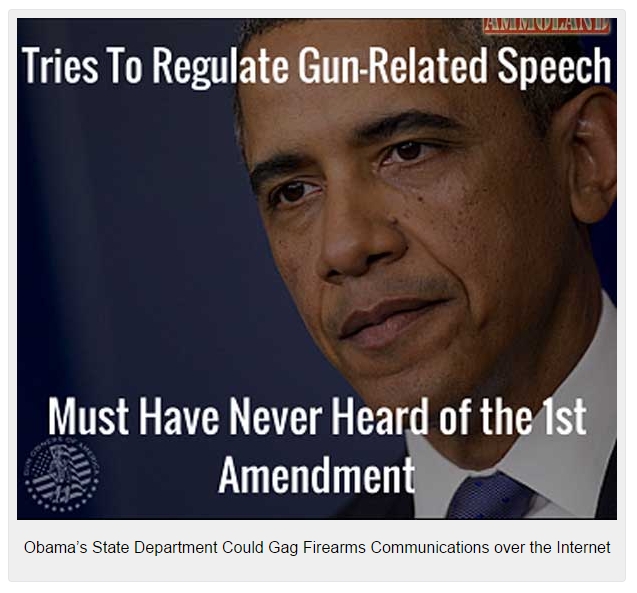 The State Department is updating the International Traffic in Arms Regulations (ITAR) and has amended the existing regs to include “making technical data available via a publicly available network (e.g., the Internet).”

This restriction on Internet “speech” is wholly new language and puts anyone who violates this provision in danger of facing decades in prison (up to 20 years) and massive fines (up to $1 million).

The language is so broad that it could potentially include virtually any gun-related communication of a functional “how to” nature.


In other words, electronically posting information on virtually any firearm or ammunition could be defined by the Obama administration as requiring, not only government permission, but potentially a government license.

Another threat to gun rights is found in the revised definition of “defense article,” which has been redefined to be “any item, software, or technical data….”

So posting certain gun-related “software” to the Internet would first require a license — and a huge license fee.  While the term “software” is new, the State Department contends that this is a mere tweaking and represents “no substantive change.”

But if there’s one unbreakable rule in politics, it’s that, when drafters take the time and effort to add a provision to the underlying text, it is never, never, ever without reason.

And if there’s a second unbreakable rule, it’s that the drafters will inexorably lie and say they’re “only codifying current law.”

What “software” should we be concerned about? Well, to start with, 3-D printer programming almost certainly falls within this category and these regs seems to be an effort to outlaw this technology by executive fiat.

San Antonio gun author Nick Leghorn, who writes for The Truth About Guns, predicts an end to “Encryption programs like TrueCrypt as well as 3D models of firearms….”

There is much more that’s involved with these regulations, and you can read about it in greater detail here.

—– Pre-written letter to the Department of State —–

To whom it may concern:

The new language — which includes “making technical data available via a publicly available network (e.g., the Internet)” — could put anyone who violates this provision in danger of facing decades in prison and massive fines.

So posting information on virtually any firearm or ammunition could be defined by the Obama administration as requiring, not only government permission, but potentially a government license.  This means violators would potentially face significant criminal penalties.

I also oppose the addition of the word “software” into these regulations, as it appears to be a not-so-veiled effort to ban 3-D printers.

I urge you to repeal these new regulations in their entirety.  Whether you like it or not, the First and Second Amendments are still the law of the land!

About: Gun Owners of America (GOA) is a non-profit lobbying organization formed in 1975 to preserve and defend the Second Amendment rights of gun owners. GOA sees firearms ownership as a freedom issue. “The only no comprise gun lobby in Washington.” – Ron Paul

Next Black vs. Blue in America