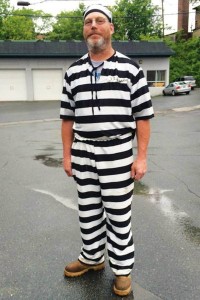 James Lowe of Barnet says he was released from jury duty on Tuesday when he showed up to court wearing a black-and-white-striped jumpsuit with a matching beanie.

Lowe told the Break.com he didn’t want to toss out the same-old excuses. “Ooh I have a job, ooh I have a family. I don’t have time for this,” he lamented. Lowe said he has heard it all. “You need to get in there and be a “jury of his peers.”

Instead, he went the creative route.

Shortly after Lowe took his seat with other jurors, deputies took him into a private room.


A judge was waiting there and told him to leave. But not before telling the creative fellow he could’ve been held in contempt of court for his actions.

That could’ve meant a fine or jail time.

Lowe didn’t argue but pointed out the juror instructions don’t restrict clothing, but that he’s happy to be released because of his work schedule and family obligations.


Previous The TOP 15 Memes The Hillary Campaign Can't Get Far Enough Away From...