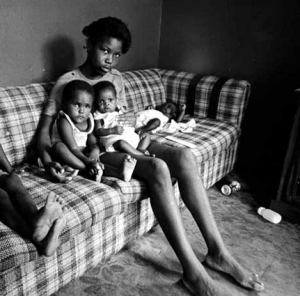 Recently, as a friend and I talked he shared about a documentary he had seen. The documentary addressed the devastation young male elephants were causing within their herds. It explained that the young males are causing unparalleled harm and disruption in the herds because there are an ever-decreasing number of fully-grown bull elephants.

He explained that the young males, fueled by raging hormones and no male guidance, (which included a good stomping when the situation called for it), would literally terrorize the herd.

My friend and I discussed the direct correlation between the similarities of the socially undeveloped elephants and the human landscape, specifically in predominantly black urban areas. Not only do the male children not have fathers to teach and guide them, many of them have multiple male siblings from multiple men. This is a particularly volatile situation because you have the normal different personalities within a family matrix, but you also have the potential exacerbation of same due to the added influence of multiple emotionally/psychologically immature fathers.

When you factor in the generational dysfunction, poverty, disrespect, emotional neglect, and inculcated inferiority, one need not strain themselves searching for reasons reasons so many blacks are dead at the hands of other blacks or in prison. Making babies out of wedlock with any female (hopefully) not suffering from a transmittable disease, is their validation of manhood – ergo the cycle of illegitimate births, death, drug, truancy, wasted lives, ad nauseam is replicated countless times every day.

Money cannot break this cycle. We see the wealthiest athletes with several children out of wedlock from several different females. Taxpayer dollars won’t correct this pandemic either as evidenced by the $22 trillion dollars wasted on the so-called war on poverty that has experienced less success than Obama has with his laughable Iran treaty.

Telling these young men to use condoms and telling the girls to go on birth control or just have them murder their unborn child as 17.3 million other black women have done is not the answer either.

College for most people today, and specifically blacks assures them of nothing more than a huge debt and a Pygmalion self-fulfilling prophesy that they cannot function outside the “hood”.

Opening basketball courts at night so they can play ball as a means of staying out of trouble is like opening a dog kennel at night to stop dogs from barking.

The message that must be taught in the home is that respect begins with self. Men and women who respect themselves typically respect the welfare of their children. But there is still more to being a father.

My son was planned for and prepared for. Being part of my son’s life has been an experience I wouldn’t trade for love or money. Raising him in a bible-believing Christian church has been the paramount component in his life.

Raising children means investing ourself in them. Unlike animals, our child leaving the nest doesn’t mean that they are no longer in need of our watchful eyes and concern.

My son can make travel arrangements and find his way around airports more efficiently than I can tie my shoes. I call him to ask how to use a remote control. I ask him how to use certain features on my computer, etc.

My son is mature and erudite. But when it comes to life experiences he cannot hold a candle to me because he hasn’t lived as long enough to deal with the array of life’s realities that I have. I am dad and I will be there until the Lord calls me home.

Father’s Day isn’t a day to celebrate baby-making or sperm dumps. Father’s Day is about being a Father. And tragically as my friend and I both acknowledged there aren’t enough fathers today.

Being a father means investing ourselves into our children. It means showing them the love that God our Father has shown us. It means being a living example, the very best that we can be, even when we drop the ball.