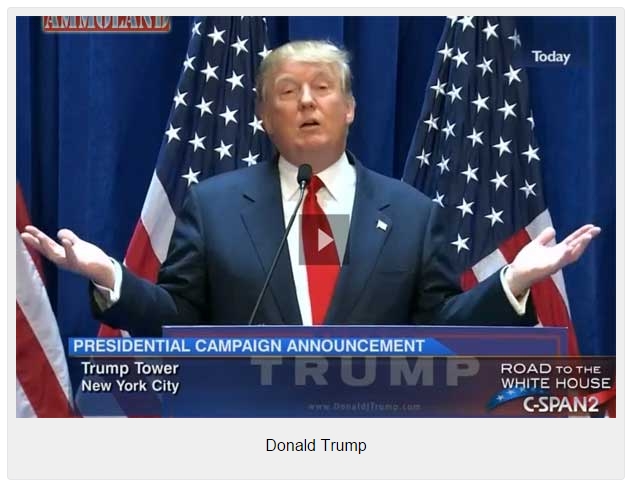 On Tuesday Donald Trump announced he is running for President in 2016.

We have to give Trump props as he is the only GOP candidate to voice his commitment to the second amendment and self defense in his very first mention of running for the presidential election in 2016.

Toward the end of his rambling announcement he said:

“[I] Fully support and back up the Second Amendment.

Now, it’s very interesting. Today I heard it. Through stupidity, in a very, very hard core prison, interestingly named Clinton, two vicious murderers, two vicious people escaped, and nobody knows where they are. And a woman was on television this morning, and she said, “You know, Mr. Trump,” and she was telling other people, and I actually called her, and she said, “You know, Mr. Trump, I always was against guns. I didn’t want guns. And now since this happened” — it’s up in the prison area — “my husband and I are finally in agreement, because he wanted the guns. We now have a gun on every table. We’re ready to start shooting [in self defense].”

So protect the Second Amendment.”

The following video contains his entire remarks, including those about the Right to Keep and Bear Arms at time mark 49:31.


It should be noted that both Donald Trump, and his sons, are members and great supporters of the NRA, appearing at the recent 2015 NRA national convention.


Previous 9th Circuit Court: Does the Second Amendment Apply Outside the Home?

Next Is Third World America Inevitable?