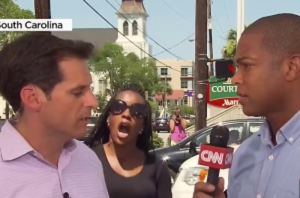 CNN’s live coverage of the Charleston church shooting was interrupted when a nearby woman walked into the shot and began screaming that white people were terrorists and President Barack Obama was an Uncle Tom.

At first, the woman could only be heard from off-screen. “It’s not a hate crime, it’s a terrorist attack,” she could be heard yelling. “White people are terrorists!”

“You can hear shouting around me,” CNN’s John Berman reported. “I should say that where I’m standing right now, there are people walking by, grieving, mourning, talking about their feelings and yes, how angry they are.”

But as the camera shifted to allow Berman to interview fellow CNN correspondent Don Lemon, the woman walked into frame. “Are you angry, Don?” she asked over and over, before adding for good measure, “The president is a puppet. Stop the lies! Stop the lies, he’s an Uncle Tom, too.”

Next Just Say NO: Here Are SHOCKING Before and After Meth Users Mug Shots