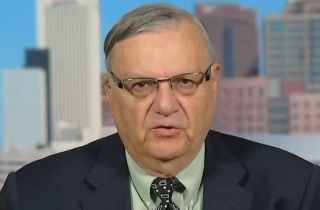 Despite there being no real reason for it, Arizona Sheriff Joe Arpaio is back in the national news again. Why? Oh, just a little matter of providing volunteer armed security to several churches in his constituency.

Specifically, Arpaio plans out using his corps of armed Arizona volunteers to help make churchgoers feel just a little bit safer at their services at 60 mostly all-Black places of worship.

“I am the elected sheriff of this county. He asked me to help, and I’m going to help,” Arpaio told reporters.

The “he” Arpaio refers to here is Rev. Jarrett Maupin, who according to the sheriff, asked him and his office for help.


Maupin said he wasn’t aware of any specific threats against churches within the county, the largest in Arizona, but he added that places of worship with black congregations often get hate mail.

“We do have a fear, a very real worry, that the incidents that occurred in Charleston can happen here in Phoenix,” Maupin said.

This is, of course, the same Sheriff Arpaio who’s currently under supervision by the federal government. Now why would an elected state official be under federal supervision? Oh, it probably has something to do with that time his office was caught red-handed racially profiling Latinos.

Next [WATCH] Hillary Clinton on Charleston: ‘We Can’t Hide’ From Truth of White Privilege