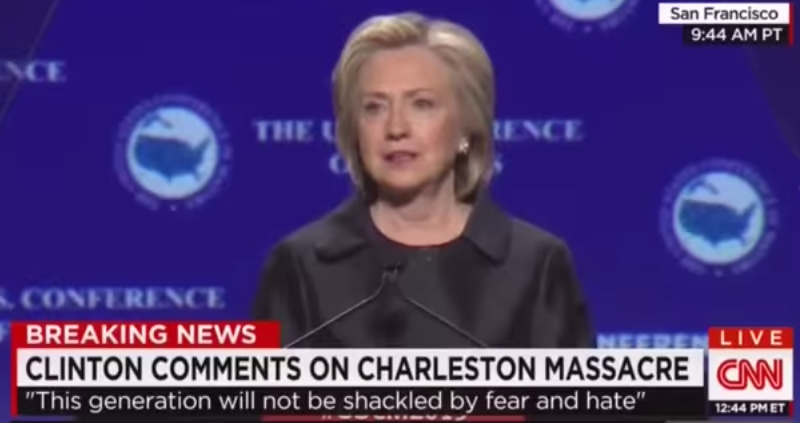 Democratic presidential candidate Hillary Clinton addressed the 83rd annual U.S. Conference of Mayors in San Francisco on Saturday morning. Among other things, she addressed Wednesday night’s shooting at the historic Emmanuel African Methodist Episcopal Church in Charleston, South Carolina, and the renewed discussion of gun control and the second amendment.

Reflecting on her time in Arkansas, Clinton noted:

“I know that gun ownership is part of the fabric of a lot of law abiding communities, but I also know that we can have common sense gun reforms that keep weapons out of the hands of criminals and the violently unstable, while respecting responsible gun owners.”

She expresses her hope that those participating in the debates past, present and future can “make this debate less polarized, less inflamed by ideology and more informed by evidence.”

However, it’s later in the address that Clinton explicitly discusses the racial nature of the Charleston shooting and the larger context it invokes:


“For a lot of well-meaning, open-minded white people, the sight of a young black man in a hoodie still evokes a twinge of fear. And news reports about poverty and crime and discrimination evoke sympathy, even empathy, but too rarely do they spur us to action or prompt us to question our own assumptions and privilege. We can’t hide from any of these hard truths about race and justice in America. We have to name them, and own them, and then change them.”

Check out the clip below, courtesy of CNN: