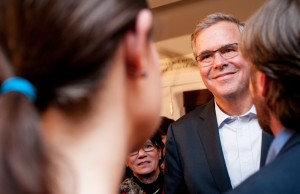 Wait a minute, did Mitt Romney actually start something? Probably not, as his Twitter pronouncement regarding the need to remove the Confederate flag from its current prominence in South Carolina wasn’t the first of its kind. Current GOP candidate Sen. Lindsey Graham and othershave already given their two cents, but Romney was one of the most high-profile political figures to do so.

On Saturday afternoon, former Florida governor and 2016 GOP presidential hopeful Jeb Bush tweeted his perspective on the renewed flag debate, as hell as how the Charleston church shooting changes things: 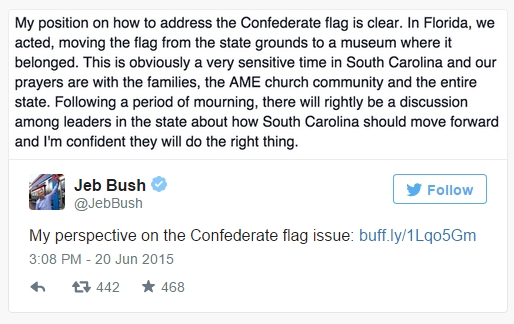 In February 2001, then Gov. Bush ordered the flag “quietly removed” from the state Capitol grounds. As his spokesperson told the St. Petersburg Times:

“Regardless of our views about the symbolism of the…flags — and people of goodwill can disagree on the subject — the governor believes that most Floridians would agree that the symbols of Florida’s past should not be displayed in a manner that may divide Floridians today.”

What happened, then, to the regional symbol coveted by many and reviled by more?


“The governor is confident that a new historical display at the museum will better reflect the context and history of Florida’s historical flags as we begin a new century.”

So yeah, Bush actually did what his statement on Saturday says he did. Of course Bush’s tweet doesn’t explicitly say what the GOP candidate’s position is on the matter. That is, he doesn’t come out and say, “We should take the flag down.”

But it still seems pretty clear what the presidential hopeful thinks. I mean, if you can read above a sixth grade level, that is.