What exactly is going on here, and who told her this looked good? Why is this woman flaunting her unborn child for the world to see? If that wasn’t bad enough (and it really is), why is this woman doing this when she has a C-section scar from hell? This dress crosses the line into gross and tasteless. Strapless with an elastic waistband? Cheap, shiny polyester? Giant slit up the front ALLLL the way up to the crotch?

Ladies, if you’ve got them jubblies, flaunt ’em, but keep can you keep it classy? Wedding guests definitely got more than they bargained for when they got themselves an eyeful of these tig ol’ bitty dresses, showing their goods off to everyone in attendance. 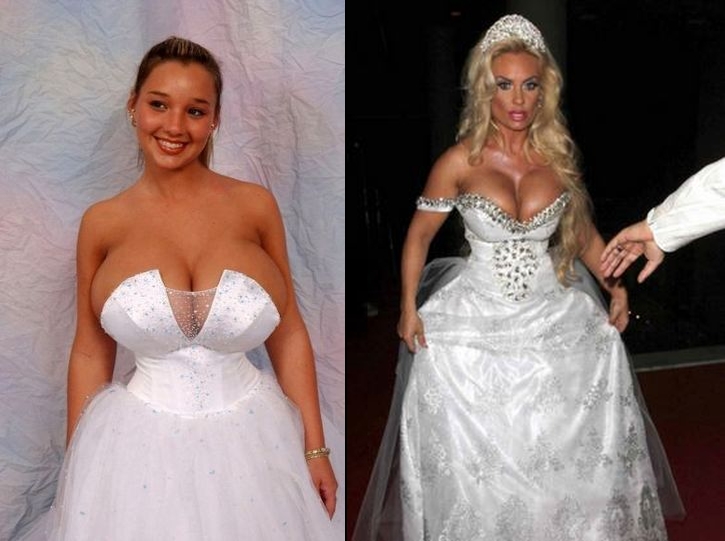 No, just…no. There’s nothing flattering or attractive about this so if you or someone you know thinks this would be ‘cute’ or ‘cool’, just say NO!

So this is definitely something I never thought I’d see. A wedding where bride, groom and bridal party are completely decked out in airbrushed digs. I remember when airbrushing had its moment in the early 90’s, and even today in amusement parks or the state fair. It was limited to a t-shirt that you’d push to the back of your closet because vacation was over, and you wouldn’t be caught dead on the street with that shit. But an airbrushed wedding dress? I dunno man. A groom in all airbrush? 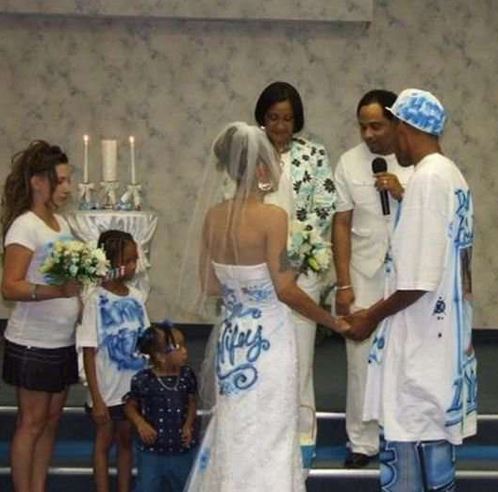 5. A Wedding Dress Made Of…CONDOMS!

This wedding dress, which consists completely of rainbow colored condoms….is….a…thing. I doubt this was anything more than for display purposes but can you seriously imagine walking down the aisle draped in a rainbow of latex? 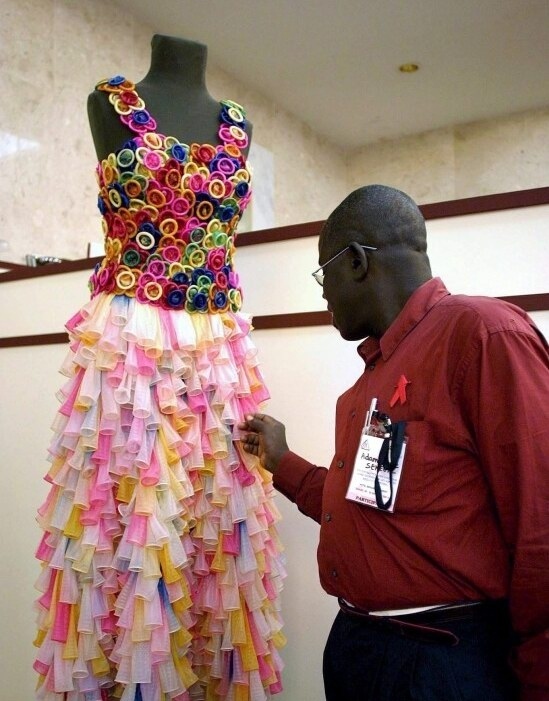 6. A Wedding Dress Made Of Cream Puffs

In 2006, a Ukrainian baker named Valentyn Shtefano made his bride a wedding dress from cream puffs. The dress consisted of 1,500 cream puffs, weighted 20 pounds and took the baker over 2-months to complete! 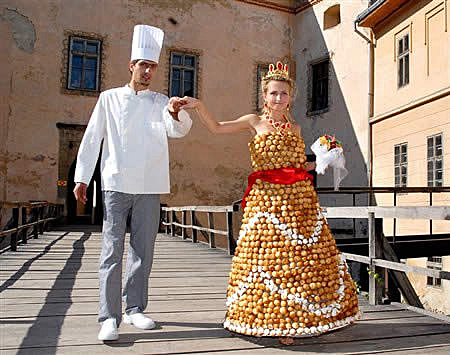 Next from straight off of the runway turned into something we would NEVER EVER wear is this whole “lingerie wedding dress” thing. I’m not going to say trend, because it’s not a trend, but it’s definitely a bad idea. 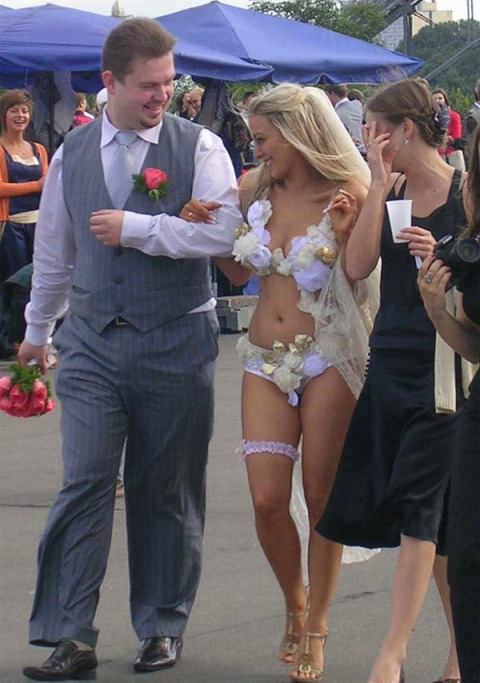 8. Supporting Her Team…Even On The Big Day

This is all shades of ridiculous. I understand liking and supporting your team but is nothing sacred anymore, such as your wedding dress? Talk about taking tasteless to a whole new level. 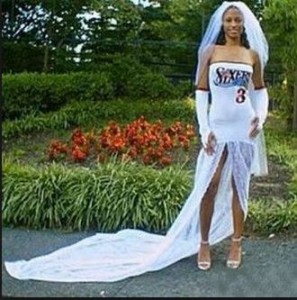 This is one of those runway dresses that just screams unwearable couture bride. Straight out of 1965, this cocoon bridal dress took its inspiration from Russian nesting dolls but looks more like a crocheted condom. 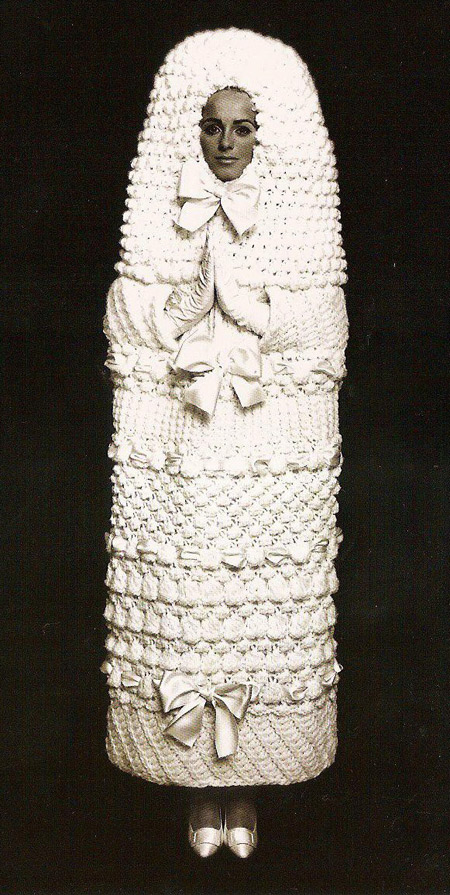 How do you show off your everlasting love for llamas, alpacas and sheep? Why, commission a woolen wedding dress to be made, of course! What the HELL is going on with this crazy wedding dress? 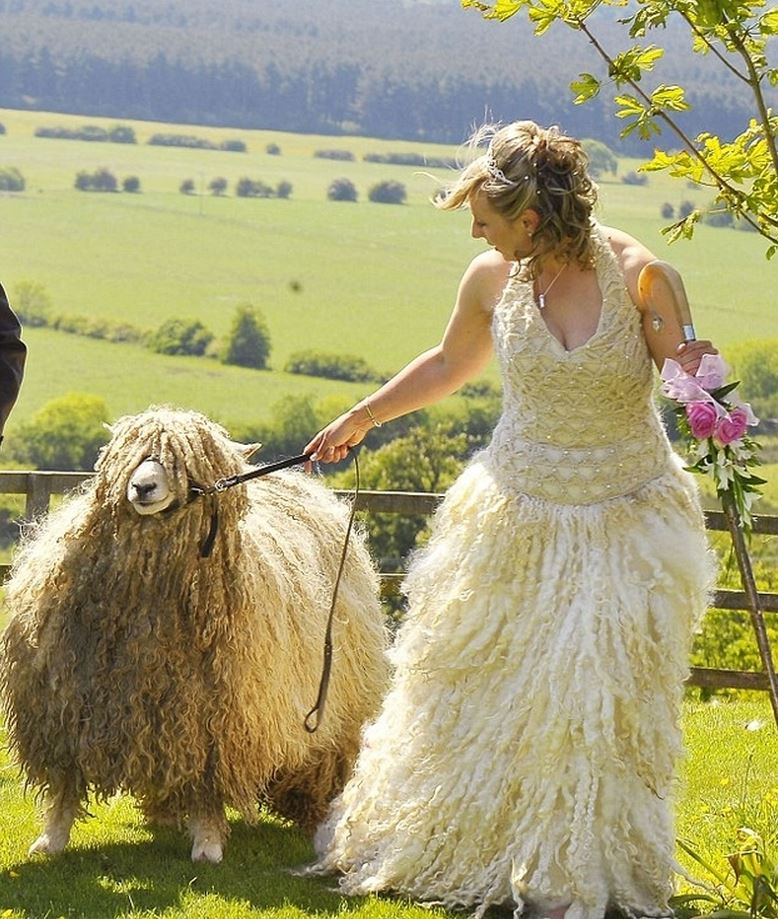 13. Leave It At The Club, Hoochie Mama

WHAT THE HELL? No, but seriously, what in the lord’s name is this woman wearing to get hitched? This looks like it was better left at the strip club for the opening act. 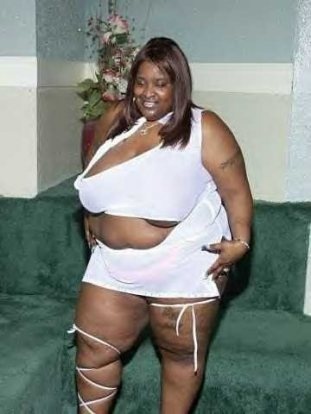 I am simply at a loss for words when staring at this picture of the happy bride and groom. First of all: This dress is atrocious. Hideous. Butt ugly. So ugly, it looks like the woman took her grandmother’s curtains and fashioned herself a handmade wedding dress, but GONE TERRIBLY WRONG! What the hell is the deal with the red lacy sleeves sewn on top? Why is this woman holding a bouquet of fake flowers? Why on earth is this woman wearing awful, plastic black open toed sandals? 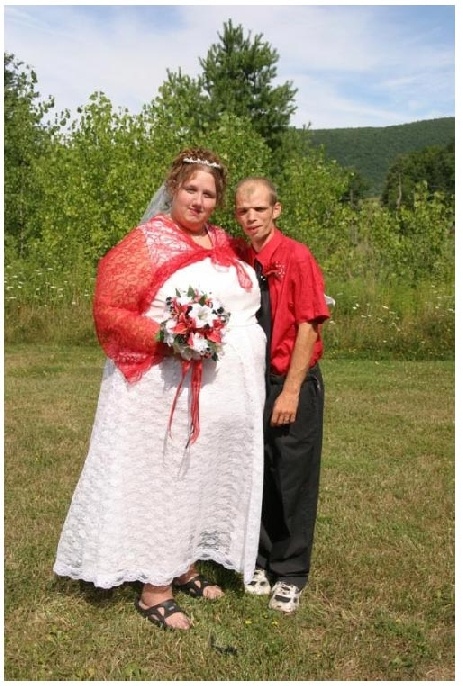 I’m not going to even get started on the groom. Ok…maybe I will. This man looks like the crypt keeper’s cousin, or a less-intelligent second cousin of “The Adam’s Family” butler, Lurch. Lurch can definitely be described as the missing link between ape and man, and doesn’t look to be the most intelligent feller out there. Look at those gym shoes also? You’d think the man was getting married, wouldn’t you?