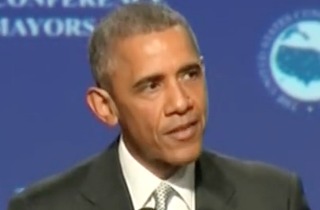 President Obama reacted to Charleston yesterday with a heavy heart, lamenting how more hasn’t been doing to reform gun laws and protect more Americans. Obama was immediately hammered by conservatives for politicizing a tragedy, but today Obama spoke again at the U.S. Conference of Mayors and strongly rejected that argument.

He said that if Congress had passed “common-sense gun safety reforms after Newtown,” it wouldn’t have prevented every act of violence, “but we might still have some more Americans with us, we might have stopped one shooter, some families might still be whole.”

The president made it clear he’s not trying to demonize all gun owners, and said that far from being resigned to nothing getting done, he has “faith we will eventually do the right thing.”

He also made this strong statement:


“I refuse to act as if this is the new normal or to pretend that it’s simply sufficient to grieve and that any mention of us doing something to stop it is somehow politicizing the problem.”

Watch the video below, via C-SPAN: