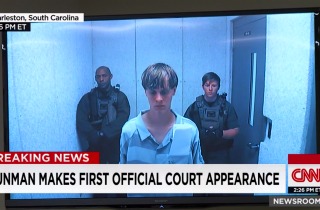 The families of the nine Charleston victims have gone through unbelievable tragedy, and yet today in court, members of some of the families confronted shooting suspect Dylann Storm Roof and spoke words of forgiveness.

Representatives from the families of Ethel Lance,Myra Thompson, Tywanza Sanders, Daniel Simmons, and Reverend DePayne Middleton-Doctor were there in court as Roof’s image was shown on screen. And all of them said they forgive him and are praying for him.

Lance’s daughter said, “You took something very precious from me and I will never talk to her ever again. I will never, ever hold her again, but I forgive you.”

Simmons’ granddaughter said that her grandfather and the other eight victims may have died at the hands of hate, but the forgiveness and love in their hearts shows “hate won’t win.”

Previous [VIDEO] Obama: Wanting Gun Reform Is Not ‘Politicizing’ Charleston, We Need to Do Right Thing

Next [VIDEO] RICK PERRY: We Need To Have ‘Good Conversation’ About Taking Down Confederate Flag