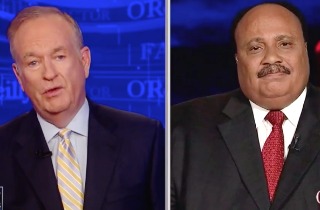 During an appearance with Bill O’Reilly tonight to talk Charleston, Martin Luther King III expressed his concerns about the influence of violent video games on popular culture.

“Look at video games,” King said. “Our children play video games and 7 out of 10 of them are violent. Some of our movies are very violent, and we want to see more and more violence.”

O’Reilly agreed, saying there needs to be more pushback and “peer pressure” to argue it’s “not a good thing to devote your leisure time to violent pursuits.”

Violent video games are often invoked in the aftermath of horrific shootings, and there have been reports that the Charleston shooter was into gaming, but the link has been shown to be a tenuous one.