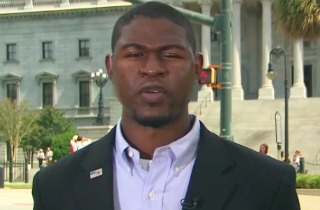 A black South Carolina student defended the Confederate flag to CNN’s Hala Gorani today, saying he has one to honor an ancestor who served during the Civil War and it doesn’t strike him as a racist symbol.

Byron Thomas explained that he’s proud of South Carolina for giving black troops pensions after the South lost the Civil War. He understands that others have reason to hate the flag, but said, “I do not feel offended… I refuse to allow a symbol or word have power over me to make me feel offended.”

Gorani asked him if the Charleston shooting changed his views at all. Thomas simply said, “I refuse to allow this evilness to make me feel a different way about my flag.”

Next Should Pastors Protect Their Church with a Gun?