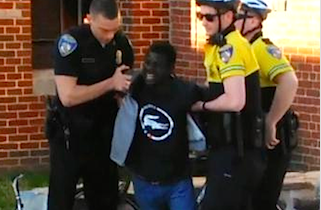 The Baltimore Sun has obtained a leaked copy of Freddie Gray’s autopsy report and according to the Maryland state medical examiner’s office he was most likely killed during a “sudden deceleration” of the police van in which he was riding.

Gray reportedly suffered a single “high-impact injury,” which the medical examiner determined should be considered a homicide as opposed to an accident because the officers put him in the vehicle with wrist and ankle shackles but did not properly belt him in. Baltimore Police Commissioner Anthony Batts admitted as much back in April, leading many to believe Gray was a victim of the common “rough ride” treatment.

According to the Sun, the autopsy report was completed on April 30, the day before Maryland State Attorney Marilyn Mosby brought charges against six officers, but had been kept out of public hands until now.

Read the full report at baltimoresun.com.

Next [PHOTOS] Confederate Statues Vandalized in South Carolina and Texas