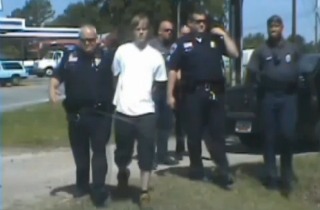 Shelby, North Carolina police have released dashcam video and of Dylann Storm Roof‘s arrest and the 911 calls that led to his arrest.

Roof, currently charged with killing nine people in the Emanuel AME Church in Charleston, South Carolina, allegedly fled and crossed state lines before he was caught.

According to WBTV, Debbie Dills––the woman who spotted Roof––called her boss, who then called 911, and he was “giving dispatchers detailed descriptions about Roof’s car and his location.”

The dashcam video shows police surrounding Roof’s vehicle, and the whole scene is actually rather calm before Roof is arrested and brought into the police vehicle.

Watch the dashcam video below, via WBTV:

Next Leaked Autopsy Report Reveals Freddie Gray’s Cause of Death