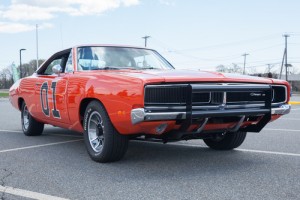 On Monday, a veritable race of sorts began as major companies and retailers publicly announced they would no longer produce or sell the Confederate flag. Walmart, eBay, Amazon — if you were to walk out into a strip mall and throw a rock, chances are you’d hit a commercial entity that no longer wants anything to do with the much-debated symbol of the South.

You can now add the ’80s television show (or, if you prefer, the godawful film adaptation from 2005) The Dukes of Hazzard to the list.

If you recall, the misadventures of cousins Bo and Luke Duke were mostly aided by the horsepower of the General Lee — a 1969 Dodge Charger with a bright orange paint job, the number “01” painted on its doors like a destruction derby card, and a print of the Confederate flag adorning its top. Unfortunately for fans of this “family classic,” Warner Bros. has decided to stop licensing a particular piece of Dukes of Hazzard merchandise featuring the flag:

Warner Bros. Consumer Products has one licensee producing die-cast replicas and vehicle model kits featuring the General Lee with the confederate flag on its roof — as it was seen in the TV series.

We have elected to cease the licensing of these product categories.

Most merchandise — like T-shirts, lunchboxes, and other bits of nostalgic diarrhea — will still be licensed and produced, but probably with any and all mentions or shots of the flag removed. What the latest move from Warner Bros. means is, if you’re a fan of television-themed Hot Wheels cars, or putting together car models via kits, you’re out of luck.