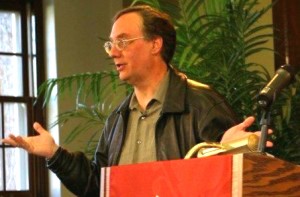 “The Muslim-hatred of the Geert Wilders and Marine LePens in Europe, for which Daniel Pipes, and Pamela Geller, and the whole Islamophobic network are cheerleaders and enablers, was a key influence on Dylann Roof, according to his manifesto,” Cole writes.

The problem is, Roof’s (alleged) manifesto doesn’t actually say anything about Pamela Geller, Geert Wilders, Marine Le Pen, Daniel Piper, or even Muslims for that matter. Rather, Cole seems to just assume that because the Roof came across racist European sites, he must have been influenced by them in some way. But there’s simply no evidence of that.

“Ironically, some groups connected to the Islamophic Network are, like Geller and Pipes, Jewish,” Cole continues. “But their anti-immigrant, anti-Arab and anti-Muslim rhetoric backfired on them in Roof’s case, since he went on heartily to hate Jews, as well.”

“That far right wing Jews would be trying to teach white people to hate non-Christians boggles the mind, since nothing could be more injurious to the American and European Jewish communities,” he concludes. “But the biggest irony is that their agitation against European Muslims should have helped inspire Roof in South Carolina to kill 9 African-Americans.”

Previous Facebook Expands Its Data Collection Capabilities, Outside Its Membership

Next The ‘Confederate Flag’ Never Called Me a Nigger: But Blacks and Liberals Have