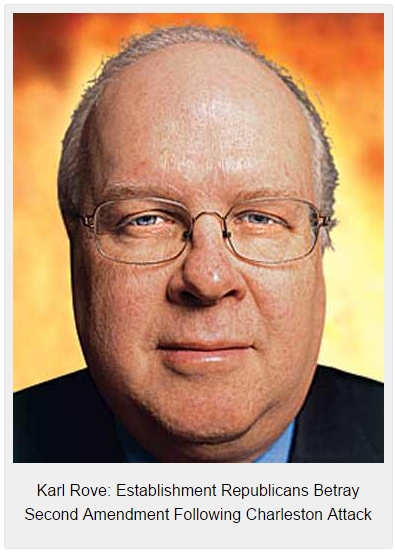 Two prominent Republicans expressed anti-gun views following the Charleston killings last week, proving how the Republican establishment can be just as bad as Democrats when it comes to Second Amendment issues.

First, Fox News talking head Bill O’Reilly proposed a “solution” to gun violence that would involve federalizing all gun crimes, saying “if anyone is caught with a gun, in the commission of any crime at all, it [should] automatically become a federal beef. If convicted in federal court, the offender gets a mandatory sentence of ten years.”

Then, Republican political adviser Karl Rove told Fox News that “acts of violence” would continue until America is forced to “repeal the Second Amendment” in its entirety. He said:

“Maybe there’s some magic law that will keep us from having more of these [shootings]. I mean, basically, the only way to guarantee that we would dramatically reduce acts of violence involving guns is to basically remove guns from society, and until somebody gets enough oomph to repeal the Second Amendment, that’s not going to happen.”

It’s hard to tell which statement is more dangerously ignorant. O’Reilly seems to think it’s a good idea to put minor crimes involving gun owners in the hands of the federal government, giving the United States Attorney General unprecedented power over guns and gun owners. If he doesn’t see the risk in that, he clearly didn’t pay much attention when Eric Holder was in office.


As for Rove, whether or not he actually wants the Second Amendment repealed, he clearly thinks doing so would make America safer. This goes against basic evidence showing that legal gun ownership reduces violence, not the other way around. Between 2007 and 2011, for example, gun violence plummeted while gun ownership went through the roof.

When liberals use mass murder to further their anti-gun perspective, it is infuriating but predictable. But it is even more concerning when so-called conservatives start to join in.

About Bluegrass Bruce
Bluegrass Bruce is a hunter, political blogger, and UK basketball fan from Kentucky. His opinions on gun rights and politics are posted on “Bluegrass Bruce” and shared on websites and blogs across the United States. Visit: www.bluegrassbruce.blogspot.com

Next Legal Gun Owners Aren’t The Problem In U.S.