As the economy in Greece becomes more unstable, banks closed their doors and set limits on the amount account holders could withdraw from their accounts.

Banks in Greece stayed shut on Monday as officials scrambled to prevent the country’s financial system from collapsing in panic.

Account holders were also facing tough limits on what they can withdraw from ATMs, and trading in Greek stocks and bonds was also halted.

The measures were announced Sunday as Greece slid rapidly toward default and exit from the eurozone.

European leaders are now facing one of the worst moments in the history of the euro. President Obama called German Chancellor Angela Merkel on Sunday, and the two agreed to take all steps to try to resolve the crisis.

The trigger for the rapid escalation in the crisis was the Greek government’s decision late Friday to pull its negotiators out of bailout talks.

Prime Minister Alexis Tsipras slammed a draft proposal from Europe and the International Monetary Fund, and said he would put it to the Greek people in a referendum on July 5.

Since then, European officials have been focusing their efforts on how to limit the damage. 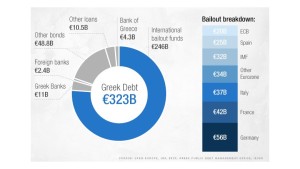 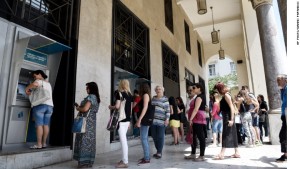 As Greece heads for default, Europe withdraws all support:

The European Central Bank said Sunday it would provide no new emergency support to Greek banks.

It was forced to act because without a bailout in place, Greece is heading for default as early as Tuesday, and may ultimately have to leave the euro.

The economy faces further trouble as this is likely to cause a drastic drop in tourism due to the unrest and instability.

An extended bank shutdown and tough capital controls will likely wreak further havoc on the Greek economy by scaring away tourists and chilling commercial activity.


Check out these great top headlines.

NEED AN OUTLET FOR YOUR POLITICAL FRUSTRATION? MEXICO IS ON TO SOMETHING.

Frustrated by the events of the Supreme Court, John Roberts, Obama, Boehner, McConnell? Need an outlet for you anger? Mexico has figured it out. Albeit …

Gay rights activist and supporters are celebrating all over the country, and social media was quick to find a way to spread the colors across

Kanye West. Could he be more full of himself? It’s mind boggling the ego this guy has. Well, it seems some of his biggest fans …

For those of us who remember mood rings, you’ve got to give it to the millennials who can raise the bar for ingenuity in the …

WOULDN’T IT BE GREAT TO UN-SEND EMAILS? WELL, NOW YOU CAN, ON G-MAIL.

While he has been gone for several years, this classic bit lives on. Eery how relevant for today this video is. Please Watch And SHARE! …

Previous Obama’s “N-Word” Moment Was Him Looking in Mirror

Next [PHOTOS] American Student Killed by her Boyfriend, who then impersonated her on social media to get away with it