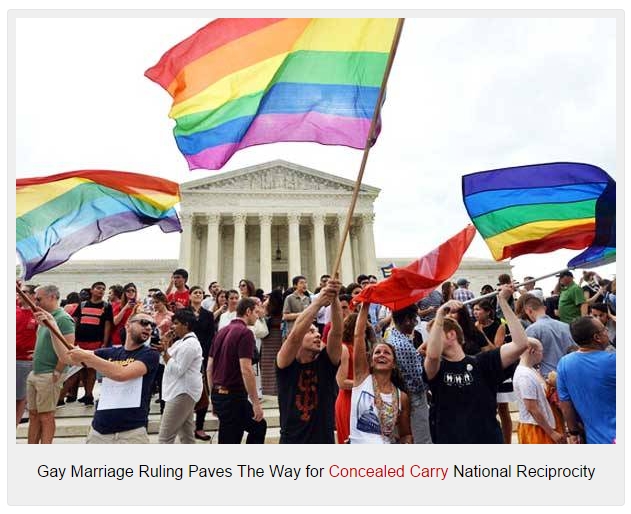 When the Supreme Court of the United States (SCOTUS) ruled that every state must recognize same sex marriages, they used a basis for judgement that will not easily stop at same sex marriage.

In fact, it is a basis for judgement that should offer itself to national reciprocity of concealed carry permits and permit holders.

Crucial in this ruling is the fact that same sex marriage–now recognized by the SCOTUS–is not the only right the 14th Amendment shields from state-by-state prerogative and/or recognition.

Consider this pertinent aspect of the court’s Majority Opinion, written by Justice Kennedy and printed by the LA Times:


Under the Due Process Clause of the Fourteenth Amendment, no State shall “deprive any person of life, liberty, or property, without due process of law.” The fundamental liberties protected by this Clause include most of the rights enumerated in the Bill of Rights.

Now the question–Are 2nd Amendment rights among those “protected by this Clause”?

Moreover, two years earlier–in District of Columbia v Heller (2008)–the SCOTUS ruled that the 2nd Amendment rights were “fundamental” in and of themselves as well as “fundamental to the Nation’s scheme of ordered liberty” (IIT Chicago-Kent College of Law)

So we have, on the one hand, Justice Kennedy expressing the majority opinion for same sex marriage by writing that “The fundamental liberties protected by [the Due Process Clause] include most of the rights enumerated in the Bill of Rights.” And we have a 2008 SCOTUS decision (Heller) explaining that 2nd Amendment rights are “fundamental” and a 2010 SCOTUS decision (McDonald) barring Chicago from a gun ban on the basis that 2nd Amendment rights are incorporated by the Due Process Clause of the 14th Amendment.

Because a concealed carry license is the vehicle through which many 2nd Amendment rights are exercised in states other than your own, there seems no way to avoid the implication that a state ought to have to recognize a concealed carry license from another state, just as states are now required to recognize same sex marriage licenses from other states.