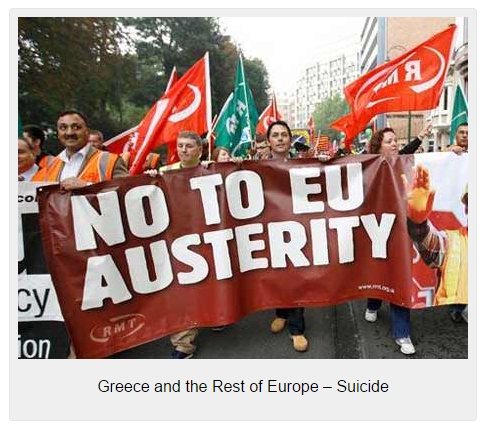 On the European situation, from a friend and student who lives there and works in their System:

The Greek Central Bank, which has been literally kept alive by constant injections of money by increasingly uncomfortable creditors, is already begging the ECB to raise the cash-ceiling for its ‘allowance.’

Angela Merkel (Germany) will meet with François Hollande (France), and the ECB, to decide if they will keep defaulting Greece on a money-drip.

Socialist Greek Prime Minister Tsipras is now performing a cynical Pontius Pilate imitation, literally washing his hands. When things go south, he will blame the Greek electorate for the choices they made, which presumptively includes electing him!

The big question is: will Greece exit (voluntarily or involuntarily) the Euro Area?

Greece stubbornly refuses to even begin to pay its bills. Other European countries (ie: us other European citizens) will have to pick-up their tab, or Greece is unceremoniously jettisoned from our System and becomes a wretched, poverty-stricken orphan!

Instead, they vote for Santa Claus!

And, let us not forget that Italy, Spain, Portugal, France are not far behind Greece!”

“Ever guard yourself from any notion of ‘entitlement.’ It is lethal, to both individuals and nations!” ~ Charles Swindoll


Previous Advice to Police – You’re On Your Own!

Next In Albuquerque, Another One of Those “Rare” Self-Defense Shootings