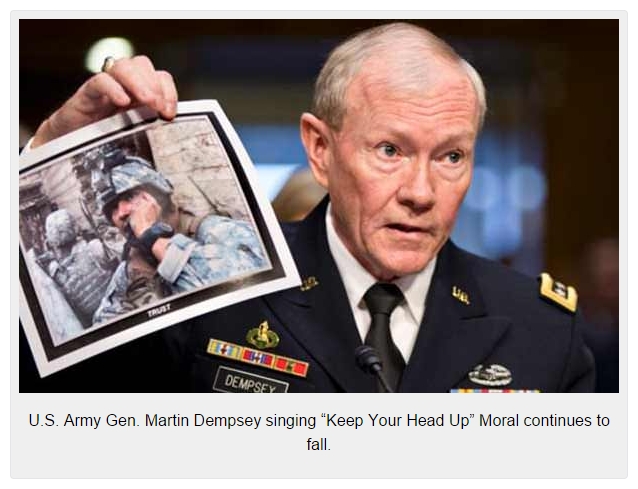 Morale among American Uniformed Services, by any measure, is at its lowest point since records have been kept!

This fact is worrisome!

Troops’ confidence in the BHO Administration, and the gaggle of upper-level boot-lickers he has appointed over them, is currently less than zero!

Most BHO-era appointees have long forgotten what it feels like to wear a field uniform, carry a real weapon, and audaciously lead highly-motivated troops. Most are grandiloquent “veterans” only of university faculty lounges!

Genuine, fighting generals and senior NCOs have all retired in disgust, or have been forced out.


No leadership that anyone can respect. Star-wearers don’t care about troopers. They care about politics and currying favor with the Administration. BHO has no understanding of our military culture, nor any regard for the people in it who are still trying to make it work. Nothing he says, and no “promise” he makes, can be believed. Troops think they are considered by upper “management” to be little more than cannon-fodder!

Our entire military, under the current Administration, has been cut to the bone, with scant protest from senior officials who should be the ones who care. Equipment is worn-out/obsolete. Staffing is inadequate. Supplies are inadequate. Fewer ships. Fewer planes. Inadequate facilities. Inadequate support structure.

Most observers now seriously doubt our current ability to sustain any kind of major conflict.

“Our efforts are in-vain,” is heard over and over. Foolish and naive strategic decisions render irrelevant poignant sacrifices made by our brave troops. We win battles, only to have to fight again, over the exact same real estate. Expensive equipment made for us is now being used by the enemy! . “There is no clear goal,” is also heard repeatedly. Confusion is everywhere. Troopers are asked to risk their lives for reasons no one can apparently articulate in any kind of understandable way. Is there a “plan,” or isn’t there?

“We’re not trusted,” is another endemic complaint. Our “armed forces” and perpetually unarmed, even in combat zones, even officers and senior NCOs. Guns are loathed and morbidly feared by paranoid senior commanders. Troopers almost never get to even touch them! Defenseless troopers have thus been massacred, on post, multiple times, and nothing is being done about it. Again, individual troopers have a hard time believing anyone up the food-chain really cares about them!

In good conscience, I can’t recommend to young people that they join-up right now!

“My fathers were Warriors. Their son is a Warrior. From them, I take my only existence.” ~ Tecumseh


Previous In Albuquerque, Another One of Those “Rare” Self-Defense Shootings