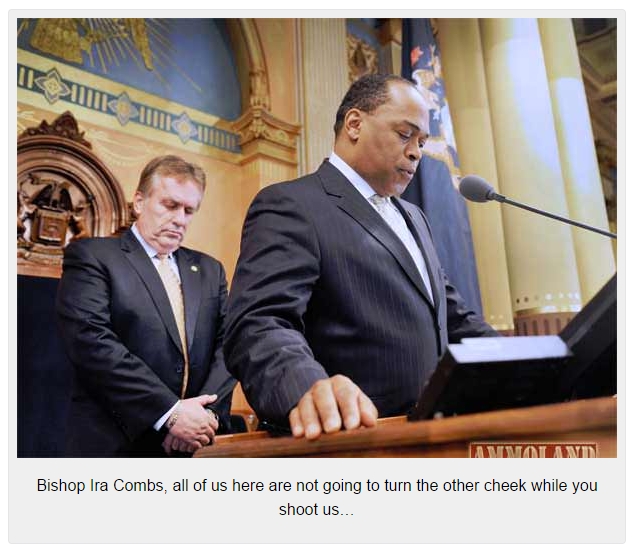 On June 28 2015 Bishop Ira Combs said various congregants in his church are armed and that any would-be attackers would not given the chance to reload if they began shooting.

According to Reuters, Combs said, “All of us here are not going to turn the other cheek while you shoot us.”

He said these things both in response to the heinous attack on the A.M.E. Church in Charleston and as a way of explaining his church’s security policy.

Responding to reports that alleged Charleston gunman Dylann Roof reloaded five times during his attack, Combs said, “If they had security, the assailant would not have been able to reload.” He went to say, “We aren’t looking to engage people in violence, but we are going to practice law enforcement…and we are going to interdict if someone comes in with a weapon.”

Combs has various people who carry concealed weapons in his church, so would-be attackers never know who may be watching and ready to respond.


In Flint, pastor Theron Wiggins takes a similar approach with one caveat — he himself is armed. He is a former police detective and believes the passive view held by many Christians is part of the “mindset” that has to change.

Regarding his congregants, Wiggins said, “They believe the angels will protect us. Well, I’m one of the angels.”

Next "Violent Right-Wing Extremists In The U.S. Are Burning Black Churches"…NOT