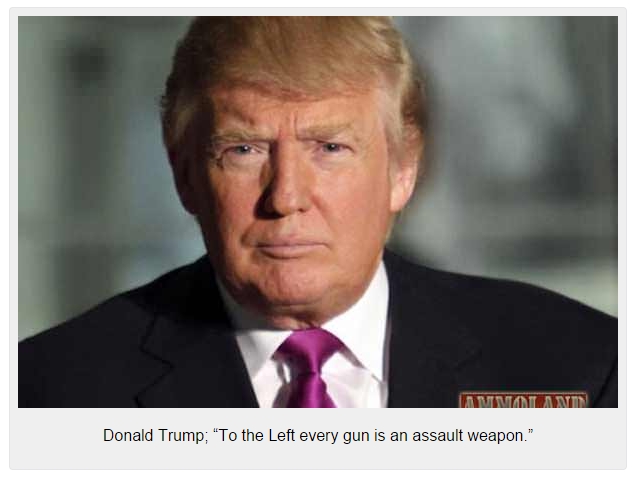 Hello Mr Trump. Many of our readers are very excited that you have thrown your hat in the ring to run for president in 2016.

They like the idea that you have nothing to do with politics and that you have real experience running large, successful business, successful being the key word. I hope you and your family are up for the challenges of running for president.

AmmoLand: Speaking of family I know you and your sons recently attended the 2015 NRA Annual Meeting, where you were asked to speak. How long have you been active with the NRA and what do you think about the influence the NRA has in politics?

“I am a Life Member of the NRA and am proud of their service in protecting our right to keep and bear arms.  The NRA’s efforts to stop dangerous, gun-banning legislation and regulation is invaluable.  The media focus on those efforts overshadows the great work the NRA does on behalf of safety and conservation.

I have a permit to carry and, living in New York, I know firsthand the challenges law-abiding citizens have in exercising their Second Amendment rights.  My most trusted sources are my sons, Don, Jr. and Eric.  They are fantastic sportsmen and are deeply involved in hunting, competitive shooting, and habitat conservation.”

AmmoLand: The deceptive term “Assault Weapons” has proven to be a buzz word among the anti-gun media. Back in 2000 in your book “The America We Deserve” you wrote “The Republicans walk the NRA line and refuse to even limited restrictions. I generally oppose gun control, but I support the ban on assault weapons and I also support a slightly longer waiting period to purchase a gun.” Since that time the AR15 rifle, what the media calls an “assault weapons“, has become America’s most popular firearm with millions and millions of them owned by good people.

Do you still stand by this quote or has your thinking evolved over the 15 years since you wrote that line?

“I certainly stand by my opposition to Gun Control when it comes to taking guns from law-abiding citizens.  You mention that the media describes the AR-15 as an “assault rifle,” which is one example of the many distortions they use to sell their agenda.  However, the AR-15 does not fall under this category.  Gun-banners are unfortunately preoccupied with the AR-15, magazine capacity, grips, and other aesthetics, precisely because of its popularity.”

“To the Left every gun is an assault weapon.”

“Gun control does not reduce crime. It has consistently failed to stop violence. Americans are entitled to protect their families, their property and themselves. In fact, in right-to-carry states the violent crime rate is 24% lower than the rest of the United States and the murder rate is 28% lower. This should not be up for debate.”

AmmoLand: You have been a long time resident of New York City and we can only assume that you know former Mayor Michael Bloomberg pretty well. We have followed his efforts to undermine the Second Amendment through his various anti-gun front groups. What does he have against the RKBA and why don’t we see wealthy conservatives making a similar ‘all in’ push to support gun rights?

“Mayor Bloomberg and I are friends. However, on this we agree to disagree. I believe there are two reasons you do not see a similar effort from Mayor Bloomberg’s polar opposite. ”

“First, many wealthy live behind gates, armed security, and away from crime.  They may have little understanding of how fellow citizens are challenged in defending themselves and their property.  The second reason is that we have the NRA and other groups already in the arena.”

“The Trump family knows these organizations are the best investment if we are to defend the right to keep and bear arms.”

AmmoLand: Karl Rove recently voiced support for a repeal of the Second Amendment as a way to stop gun violence. What do you think of this suggestion or, as our readers believe, is it a God given right that can not be repealed by politicians?

“The Second Amendment is a bedrock natural right of the individual to defend self, family, and property.  It is a ridiculous notion to ever repeal it.”

“For Rove to even think it shows a lack of respect for all of the freedoms in our Constitution and a complete ignorance of our shared American inheritance.”

AmmoLand: As we have reported on AmmoLand Shooting Sports News, two of your sons, Eric and Donald Trump Jr., have been the target of harassment by anti-hunting groups after they posted pictures of their successes while hunting in Africa. What advice do you have for other hunters that maybe be being bullied online or elsewhere by this shrill minority?

“My advice is to remain vigilant.  Harassment of this nature will always be with us, but we know that Americans have inherited a strong outdoor and shooting heritage that we are happy to defend.”

“The 2nd Amendment is right, not a privilege. The small minority of anti-everything activists may be vocal, but we have facts, and the Constitution, on our side.”

“I would also add that hunters contribute more to the preservation of game animals and their habitat than any of these protesters. Hunters are the original conservationists. To see this historically you have to look no further then Teddy Roosevelt and his creation of the National Parks System.” 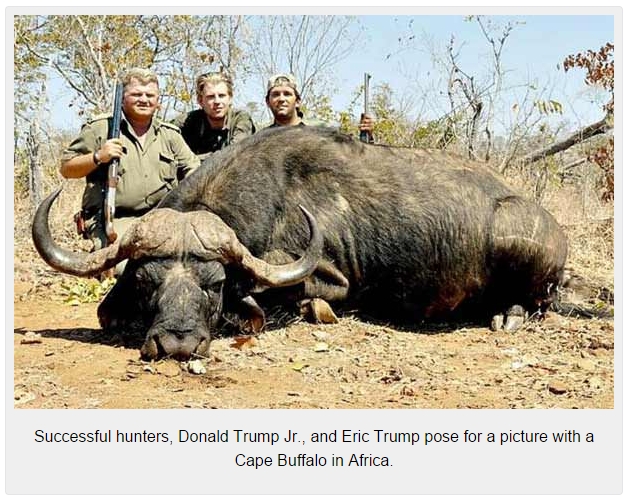 AmmoLand: Universal Background Checks to acquire guns is something President Obama has long been pushing for, yet background checks would not or did not stop any of the recent shooters from getting guns. What is your position on Background Checks? And do you see a need for even more government approval for someone to own a gun?

“They make it more difficult for law abiding citizens to acquire firearms while consistently failing to stop criminals from getting guns. We should re-examine our policy to make sure that these prohibitions do not impede law abiding citizens from exercising their Second Amendment rights.”

AmmoLand: A lot of Democrats in politics today are crying for firearms magazine restrictions. But as we saw just with the Charleston, S.C. church killer, he used standard capacity magazines and quickly changed them out five or more times. So how does it make any sense to have gun magazine size limits?

“Gun magazine limits do not make common sense. I have long opposed such limits. For instance, I fought the SAFE Act in New York, which I call the “Unsafe Act.”  I also spoke at a rally in Albany championing gun rights and protesting the Unsafe Act. The law limited capacity to seven rounds, as if criminals were going to take rounds out of their magazines before committing a crime.  It was later changed to a limit of ten rounds, but the entire episode was a complete disaster.”

“Never mindful of the results, this effort was just one more attempt to erode the Second Amendment.”

AmmoLand: Lots of AmmoLand’s active duty readers have complained that many, if not all, of our military bases are “Gun Free Zones” and that these highly trained war fighters are left defenseless and disarmed against murderers, like the Fort Hood Shooter, when they are stationed on U.S. bases. Would you have a problem allowing our military bases to set their own polices with regard to personal weapons and do away with the “Gun Free Zones” death trap?

“[gun free zones] No, not optional.  As Commander-in-Chief, I would mandate that soldiers remain armed and on alert at our military bases.

President Clinton never should have passed a ban on soldiers being able to protect themselves on bases. America’s Armed Forces will be armed.

They will be able to defend themselves against terrorists. Our brave soldiers should not be at risk because of policy created by civilian leadership. Political correctness has no place in this debate.”

AmmoLand: Thank you for taking the time to answer some of our questions today. We wish you the best of luck in your presidential run. As we leave you would you like to tell our readers what the Second Amendment means to you and your family?

“The Trump family will stay vigilant in our support of right to keep and bear arms.  And given today’s threats across the United States it is as important now as ever.  National Security begins in our homes.  All citizens must have the ability to protect themselves, their families, and their property.  The Second Amendment is a right, not a privilege. Our safety and defense is embodied in the Second Amendment and I will always protect this most important right.

“Our country is ready for a bold new direction. We can bring common sense to Washington. This is our time to Make America Great Again!”