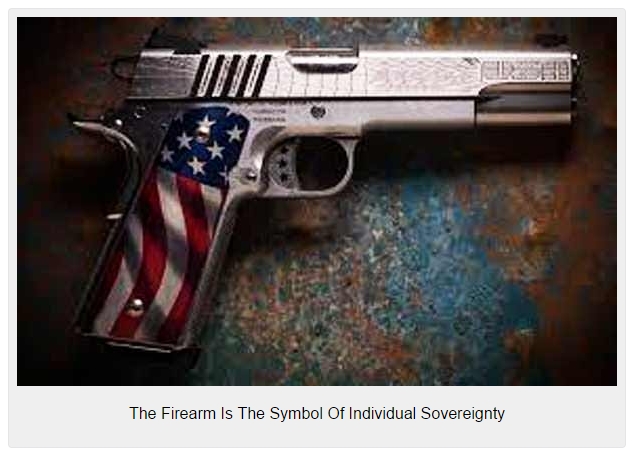 Even with the combat technology wielded by our armies today, the single person firearm is more than just a symbol of individual sovereignty.

Firearms in private hands function to protect the balance of power between the people and their government.

Our Founding Fathers could not envision the extent to which science could take us, but their principles hold firm through the centuries.

The simple firearm remains the symbol of individual sovereignty and liberty.

Today we see that the reaction of the media, our government and many of our citizens to yet another mass murder, with a firearm, indicates that they have no understanding of what freedom means or why freedom is not always convenient. We must acknowledge that its time for us all to return to the basics.

Several decades ago, it was common for gun writers and gun owners to discuss the politics of the Second Amendment, and other Amendments. But that discussion was side tracked when it became obvious that we were in a public relations war with enemies who wished to disarm Americans. Their simple tactic was to frighten the public and their representative law makers. Their goal is to keep the ignorant public concerned about gun-owner existence.


The Second Amendment was under fire. The Constitution was in danger.

So we stopped discussing the fundamental precepts upon which our country was founded and began addressing their specific attacks. Discussion of principles gave way to refutation of lies. For example, Dr Arthur Kellermann “proved” that personal possession of weapons put our families, children and friends at risk of homicide. The problem for us, is that Kellermann outright lied. He played with the statistics.

Kellermann played with the definition of ‘victim‘, so perpetrators also became victims in order to change the statistical outcome.  He wrote, ”Fifteen victims were killed under legally excusable circumstances. Four were shot by police acting in the line of duty. The rest were killed by another member of the household or a private citizen acting in self-defense.”

How could Kellermann, a physician and scientist, treat dead criminals as innocent victims? He could, if he deliberately lied. And why would the famed New England Journal of Medicine publish this article? They could, if they agreed with the lie.

A year later, a group of learned men refuted the Kellermann paper and many other papers whose author’s lies were designed to frighten the unknowing public. There is now a large body of conflicting literature available proving that ‘guns are good’ or ‘guns are bad’. Topics include safe storage of weapons and ammunition, the presence of weapons as a cause of violence, the number victims, the costs to society, the number of self defense uses, firearm accidents, and firearm suicides, among others.

You could choose your side depending on your philosophy. Their side had visible ‘statistical‘ corpses to prove the deaths. And our side proved that many would-be victims are healthy and alive because of civilian owned weapons, but it’s difficult to find out who they are. You need to read volumes of books and scientific articles in order to understand how we know.

At about the same time, two books discussed government as mass murderers of civilians. Lethal Laws and Death by Government: Genocide and Mass Murder both attempted to explain that disarmed citizens were at much greater risk of death from government rather than from negative aspects of civilian gun ownership.

This information contributed to the understanding that free armed people and their friends, families and towns are better off, despite the negative aspects of weapons.

Although it is important to know the positive and negative costs of owning firearms, we need to begin again to discuss the basic foundations of our freedom. At this point, because the recent mass murder took place in a church and because the murderer was fond of Civil War and Nazi symbols, both the First and Second Amendments have come under fire.

A Confederate Battle Flag has become the center of a First Amendment assault. People crazed with ignorant anger believe that they, not laws, control the kind of speech that is permitted in our country. They believe that emotional harm gives them the right to deny the speech of others.

But here’s the problem. Whenever we abridge the freedom of others, and refuse to defend their rights, we enfeeble that right for ourselves, and we send that right to our children in a weakened form. Banning disgusting political speech will bottle up our true expressive desires and create a powder keg of anger in the affected minority, in this case, progeny of confederate war veterans.

As Jews, we authors accept, even welcome, the time when marchers bearing Nazi swastikas planned to enter a neighborhood in which lived many Holocaust survivors, because we see that the strength of our First Amendment was mirrored in the potential behavior of Nazi sympathizers. We accepted the discomfort. Whatever emotional distress we felt was balanced by the surge of liberty that benefited all of us. Principles matter.

Many years have passed during which decisions of all kinds seem to weaken our nation. People function for the whim of the moment and forget the principles that determine the strength of our future.

Freedom is never free. Sometimes, the cost is blood. Often, the cost is hard work. And as we see, the cost can be anguish and mental pain. Still, our liberty is beyond value. We feel that the costs are minimal when compared to the benefits.

We need to stop the destructive mob momentum. We all need to use our First Amendment rights and speak out. Why should we let the time come when the Second Amendment is the last remaining freedom amendment and our children need it as their last resort?

The firearm MUST remain the symbol of individual sovereignty.

Alan J Chwick has been involved with firearms much of his life, and is currently the Managing Coach of the Freeport Junior Club, at the Freeport NY Revolver & Rifle Association, Freeport, NY.

Joanne D Eisen practices dentistry on Long Island, NY. She has collaborated and written on firearm politics for the past 25years, and is a Senior Fellow in Criminology at the Independence Institute in Denver, CO.

Previous That Confederate Flag Would Have Offended Your Great-Great Grandfather

Next John Adams and American Independence