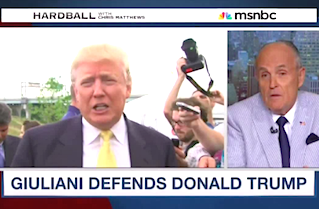 Giuliani said it was a mistake for Clinton to turn the immigration debate into a “partisan” issue by attacking Trump. “Donald’s a friend of mine, I respect him, I think he’s an unbiased man,” Giuliani said, adding that Trump may have just made his point “in reverse.”

Of course, as Giuliani implied, Trump did “reverse” that equation, calling immigrants “rapists” before adding that “some, I assume, are good people.”

“I don’t agree with Donald’s comment,” Giuliani added later in the interview, but said he would make the same point “differently.”

Watch video below, via MSNBC:

Next [VIDEO] Hillary: GOP Like Trump on Immigrants — Either Hostile or ‘Grudgingly Welcome’