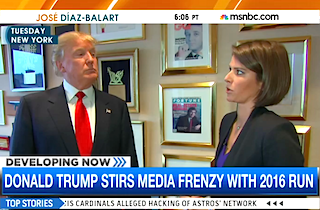 Of all the outlandish, off-the-cuff comments made by Donald Trump during his 2016 presidential campaign announcement, perhaps none is getting more attention that this line about Mexican immigrants: “They’re bringing drugs. They’re bringing crime. They’re rapists and some, I assume, are good people.”

Following the speech, MSNBC’s Kasie Hunt confronted Trump about the “rapist” line specifically and he took the opportunity to double down.

“They’re sending us not their finest people,” Trump reiterated. “And it’s people from countries other than Mexico also. We have drug dealers coming across, we have rapists, we have killers, we have murderers. I mean it’s common sense, what do you think they’re going to send us their best people, their finest people? The answer is no.”

Responding to Trump’s comments in his Washington Post column on Wednesday, Jonathan Capehart predicted that they will not only prevent the candidate from becoming the GOP nominee, but could actually “keep the Republican Party out of the White House.”


Watch video below, via CNN:

Previous [VIDEO] Hillary: GOP Like Trump on Immigrants — Either Hostile or ‘Grudgingly Welcome’