A few weeks ago, when the fervor over taking down all Confederate symbols was at its peak, some attention was drawn to this, um, interesting village seal from Whitesboro, New York: 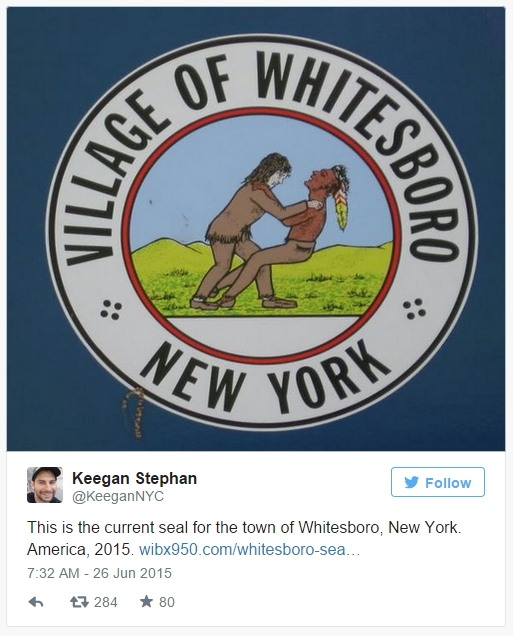 Doesn’t that look an awful like someone choking a Native American? On an official village seal, no less?

Well, Whitesboro Mayor Patrick O’Connor explained to The Village Voice this week that actually, it’s not what you think it is:

“I am aware that people are upset about it. Some have reached out directly to me through my village email. And if they looked at the seal and went with an opinion based solely on what they’re looking at, I could understand why people would have concern about it. But, [as with] everything else, I think you have to take all the facts into consideration. And if people take the time to do that and they reach out to us, or they do the research themselves, it’s actually a very accurate depiction of friendly wrestling matches that took place back in those days.”

The Voice notes how Whitesboro’s website highlights the historical meaning of one certain wrestling match between settler Hugh White and an Oneida chief.

Previous [AUDIO] Bernie Sanders: ‘As a Nation, We Have Got to Apologize for Slavery’

Next [VIDEO] Trump: ‘I Would Bomb the Hell Out of the Oil Fields’ in Iraq to Fight ISIS