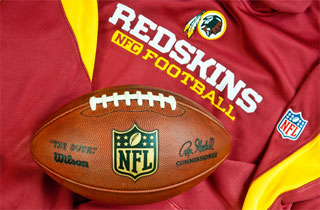 In the two decades of legal battles the Washington Redskins football team has faced, a federal judge dealt the most crushing blow they’ve seen yet: the cancellation of their mascot’s trademark registrations.

The Washington Post reported that District Judge Gerald Bruce Lee upheld an earlier finding by an administrative appeal board, when the team filed its first lawsuit against the Patent and Trademark Office. The ruling affirms that the Redskins’ registered holdings are ineligible for legal protection because of perceptions that the name and mascot are racially offensive towards Native Americans.

“What actions, if any, the Pro-Football Inc takes going forward with the marks are a business judgment beyond the purview of this Court’s jurisdiction,” Lee wrote.

Jesse Witten, one of the attorneys representing the Native Americans, celebrated the judge’s ruling as a “victory for human dignity”. Witten acknowledged that the fight was not over, but still called the event “a watershed moment.”

“I am surprised by the judge’s decision to prevent us from presenting our evidence in an open trial,” said Redskins President Bruce Allen in a statement. “We are convinced that we will win on appeal as the facts and the law are on the side of our franchise that has proudly used the name Washington Redskins for more than 80 years.”

The cancellation will not go into effect until the Redskins have gone through all of their appeals.

Previous Former Gov. Pataki Says; ‘It Is Illegal To Bring A Gun Across State Lines’...WTF?